Technology stocks were the driving force behind the covid-recovery rally in stocks, but have recently become an area of weakness for the Nasdaq 100, Dow Jones and S&P 500. Lockdown beneficiaries like Netflix, Zoom, Microsoft and Apple have seen their stock prices falter in recent weeks as investors scrutinize lofty valuations and traders attempt to call a top. The shift in demand for this sector of the market has been reflected in exchange traded fund flows, particularly in the case of the QQQ ETF. 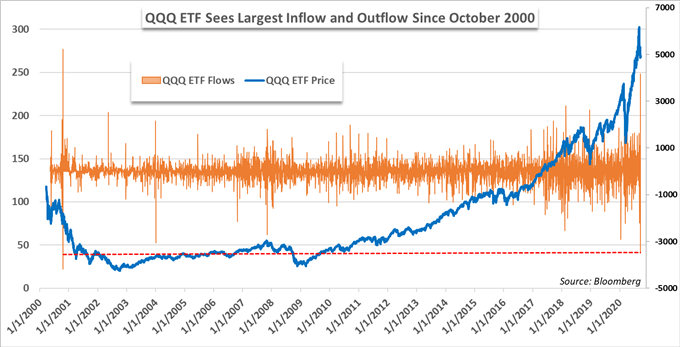 The QQQ ETF, which closely tracks the tech-heavy Nasdaq, saw its largest single-day outflow since October 19, 2000 last Friday when more than -$3.4 billion left its coffers. The withdrawal is the second largest in the fund’s history and helps highlight the conviction behind some of the recent selling pressures in technology stocks.

ETF vs Stocks: How to Choose the Best Investment

That said, the conviction expressed in Friday’s withdrawal is not without a counterpart as the fund saw its second largest inflow on record this Monday, September 21, the next available trading day. Interestingly enough, the sudden exodus and influx parallels the prior records in 2000 as the October 19, 2000 exit was immediately succeeded by an inflow of more than $5.2 billion the very next day.

Evidently, it is not unheard of to have extreme allocation changes in close proximity, and in fact it may suggest the flows are indicative of broader market themes than a one-off event. In October 2000, the Nasdaq fell by nearly -10% and was in the midst of the bursting of the Dot Com bubble. Collectively, the Nasdaq declined roughly -35% in 2000, which also happened to be an election year.

Shift forward to 2020 and in some ways, the Nasdaq 100 finds itself in a similar situation. First, an unforeseen factor caused equity valuations to decline significantly which was followed shortly thereafter by a Presidential election. While the extraneous threat to the economy is entirely different and the political landscape has morphed into an unrecognizable cacophony compared to what it was two decades ago, similarities in asset prices can be noted – at least to some degree.

Largest ETFs by Assets Under Management

That being said, past performance is not indicative of future results and claiming technology stocks will suffer a similar fate in 2020 as they did in 2000 would be incredibly presumptuous. Nevertheless, the magnitude of capital movement in the QQQ ETF at both points in history might help highlight the gravity that weighs on the market.

Either way, technology stocks have developed technical deficiencies on the back of recent weakness and worrisome similarities have emerged. With a looming Presidential election poised to create further volatility, the Nasdaq may be vulnerable to further declines in the coming months. In the meantime, follow @PeterHanksFX on Twitter for updates and analysis.