The Dow Jones Industrial Average (Dow) futures are climbing at early Asia hours, after rising 0.41% on Friday. Traders may ride the normal ebb and flow with a relatively quiet macro calendar today. This Wednesday’s FOMC meeting and Thursday’s BOJ and BoEinterest rate decisions are among the top events this week and thus will also be closely watched out.

Japan’s Liberal Democratic Party’s (LDP) election, which decides who will replace Prime Minister Shinzo Abe after his resignation, is held in Tokyo today. The chief cabinet secretary Yoshihide Suga, a candidate perceived as popular, is likely to keep Abe’s policy largely unchanged if elected. Any unexpected outcome, however, is likely to dampen risk appetite and spook the Japanese Yen.

The VIX volatility index has fallen for a fifth consecutive session to 30.99, suggesting that the recent technical pullback might be another healthy correction amid a mid-term bull run. 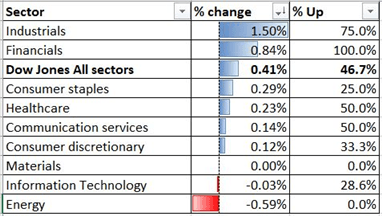 Japan’s Nikkei 225 index has opened higher to start the trading week. Today’s LDP election will be closely watched by traders amid a seemingly low-volatility session. The USD/JPY was ranging between a narrow zone between 106.0-106.4 in the past few days, giving few clues to the equity traders.

Technically, the Nikkei 225 is attempting to break a key resistance level at 23,300 – the upper ceiling of its “Ascending Triangle” as shown in the chart below. A meaningful breakthrough will likely open room for further upside towards 24,000.

Technically, the HSI has broken down the upward trend as indicated in the chart below. It has since entered a bearish trend and has tested a key support level at 24,100 – the 38.2% Fibonacci retracement. The MACD indicator remains in a bearish setup and trends lower, suggesting more consolidation ahead before market reaches a real bottom.