Across FX volatility markets, implied vols have been bid in recent sessions as we draw nearer to the Jackson Hole Symposium, in which Fed Chair Powell is scheduled to speak from 14:00BST tomorrow. Particular interest however, has been on Japanese Yen markets with overnight implied USD/JPY vols up from 6.975 to 7.96 amid speculation that health concerns could potentially force Japanese PM Abe to step down.

Recommended by Justin McQueen
Download our JPY Forecast
Get My Guide

Japanese Yen Had Initially Shrugged Off Abe Resignation in 2007

This wouldn’t be the first time that Shinzo Abe had resigned as PM, who stepped down on September 12th 2007. However, the initial reaction from the Japanese Yen had been somewhat muted to the resignation, while Japanese equities and JGB yields had come under slight pressure. 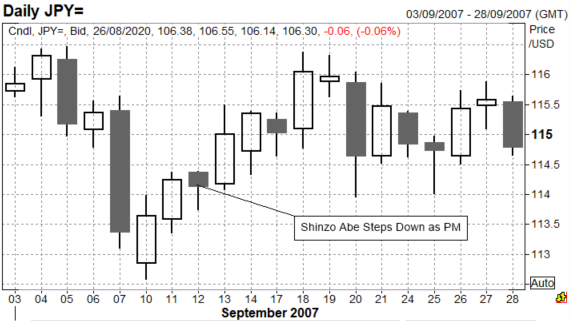 It is that time again where month-end flows will be gaining more traction as we close out August. As it stands, investment bank models from the likes of Citi and Barclays have pointed to modest USD selling. That said, given the outperformance in Japanese Yen, there is a potential for a bid in cross-yen, particularly against the Pound as UK equities have once again lagged its major counterparts. Yesterday, we pointed out that GBP/JPY has typically seen a bid at the end of the month. This month appears no different.

Ahead of the Jackson Hole summit, USD/JPY is likely to trade within a relatively tight range with upside capped at 106.55-60 in the short-term, while support resides at 105.85-95. That said, we are placing close attention to US yields which once again are on the front-foot and thus keeping USD/JPY supported.