Trading the Non-Farm Payrolls (NFP) After Worst Jobless Claims Ever

Worst Initial Jobless Claims Ever Can Get a Whole Lot Worse

Alarm bells ringing for the US economy with the impact of the coronavirus and the subsequent lockdown measures placing significant pressure on the labour market. Another cataclysmic surge in initial jobless claims at 6.6mln almost doubling expectations of 3.5mln and as such, that is now the worst jobless claims report in history. Consequently, what has happened in two weeks with 10mln filing for jobless claims, took months during the global financial crisis. That said, while the historic figure will grab the headlines, many had expected the jobless claims to soar with Goldman Sachs changing their call to 6mln from 5.25mln before the release and market participants continue to expect the jobs market to deteriorate further. In turn, the initial market reaction had been relatively muted with US equity futures pulling off slightly, while safe-haven Japanese Yen saw a marginal uptick. With the US extending lockdown measures till the end of April at the earliest, the initial jobless claims report can get a whole lot worse. 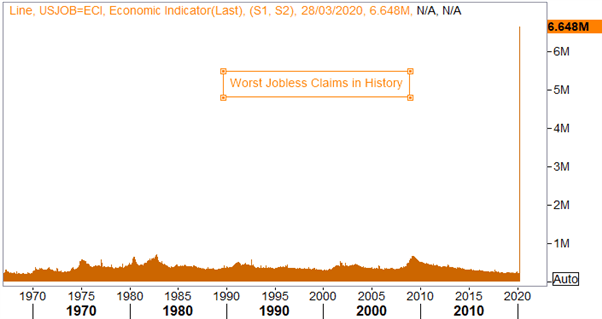 Calm Before the NFP Storm

The NFP report will be somewhat backward-looking compared to the initial jobless claims report. As such, much like the AFP report, expectations are for a modest contraction in the headline figure. Keep in mind that the NFP report is from the week of March 8-14th. In turn, with the first notable lockdown orders taking place from March 20th in California with other states reporting lockdown procedures shortly after. The full extent of the coronavirus is unlikely to show up until next month’s reading, which will also have revisions for March.

NFP and Forex: What is NFP and How to Trade it?

A smaller than expected drop in the headline figure may provide some mild reprieve for high beta currencies such as the AUD and NZD. However, it is also important to note that focus will also be on the unemployment figure, which is expected to jump to 3.8% from 3.5%, while wage growth is seen slowing both on the monthly and yearly figures. That said, a notably weak NFP report could see the Japanese Yen push higher, although, as the data is lagging, we expect the impact to be relatively muted on the whole, with greater focus now on the jobless claims figures in the weeks ahead, given that it is the most up-to-date economic indicator.