The Australian Dollar made modest gains Friday on news that China’s private service sector saw a big March bounce in activity even if overall output continued to fall.

The March Purchasing Managers Index from media group Caixin came in at 43.0, hugely above both the 29.0 print expected and February’s miserable record low of 26.5. PMI releases indicate output expansion if they come in above the 50 line.

These data mirror the remarkable return to expansion territory seen by the private manufacturing sector and, perhaps more importantly, state-linked heavy industry last month. Taken together with the Caixin manufacturing release, the March composite PMI is 46.7, above February’s 27.5.

Of course, markets are concerned with the global spread of coronavirus which continues to claim lives and shut down economic activity, but these Chinese numbers suggest that there at least economic conditions may be normalizing somewhat, even if markets are sceptical that this can be a lasting phenomenon so soon.

The Australian Dollar often acts as the foreign exchange market’s favorite liquid Chinese-economy bet thanks to Australia’s vast and complex trading links to China. It seems to have done so to some extent on Friday, heading up right after the release. 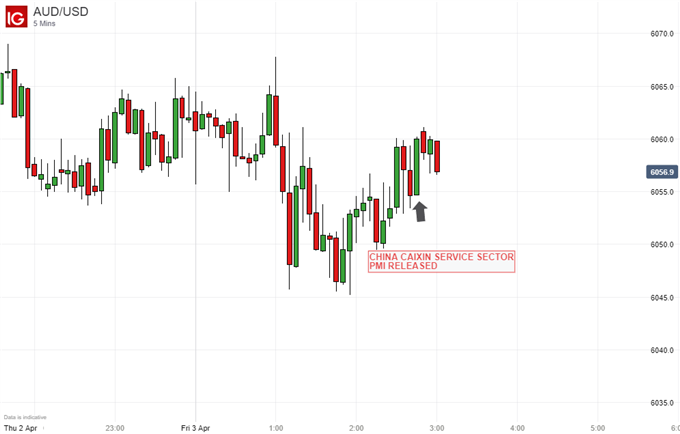 As perhaps the most obviously growth-linked widely traded currency the Australian Dollar has of course been pummelled this year as the spread of coronavirus has bitten hard into global prospects. 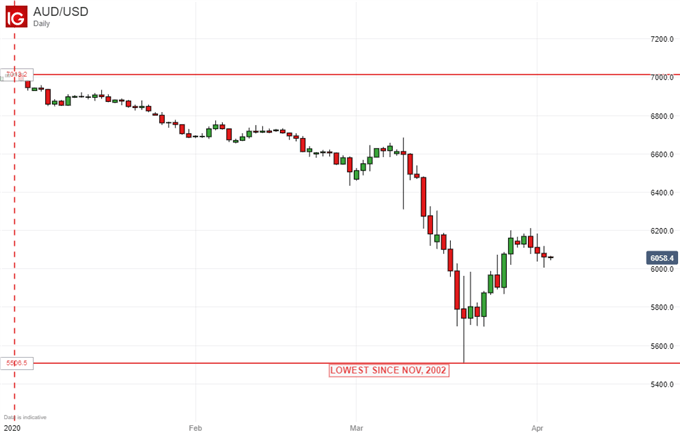 Beaten down to near-eighteen-year lows against the US Dollar, the Aussie benefited from the risk revival which accompanied various massive governmental stimulus and monetary easing programs around the world, notably of course the US’ two-trillion dollar scheme.

Still, Australia saw two interest rate reductions last month as part of its contribution to the fight, and may well see another next week which would take the key Official Cash Rate down to zero for the first time.

In such an environment it is very hard to see the currency making substantive gains until there are conclusive signs that the spread of contagion has been headed off. That’s not coming anytime soon.