The Australian Dollar found only a brief respite in its trek lower Tuesday on news that China’s private manufacturing sector returned to expansion territory in March after a massive, coronavirus linked hit in February.

The March Purchasing Managers Index from media company Caixin came in at 50.1, well ahead of both the 45.0 print expected and the previous month’s 40.3. In the logic of PMIs any reading above the 50 line signified expansion for the sector in question. The Caixin version covers smaller Chinese firms, usually those in private hands. The outcome mirrors the astonishing turnaround already seen this week in the official version of this indicator which tracks the progress of larger, state-linked enterprises.

It certainly seems that the Chinese economy is emerging from its virus-induced lockdown but, with so many of its erstwhile customers still paralysed by the contagion, end demand for much of this manufacturing production must remain in severe doubt.

The Australian Dollar often finds itself the markets’ favoured proxy bet on the Chinese economy thanks to its home nation’s famed raw material export links with China. It didn’t obviously do so in this case, with this upbeat number failing to add any vigor. 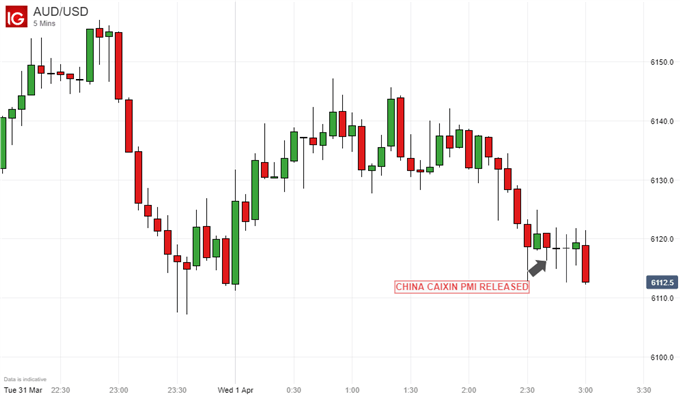 Still, the Aussie is like most other markets in thrall to overall global risk sentiment which is in turn driven by news of the coronavirus’ spread and the measures taken to tackle it. Earlier in the session investors reacted in muted fashion to the minutes of the Reserve Bank of Australia’s emergency monetary policy meeting on March 18. The Official Cash Rate was cut to a new record low of 0.25% back then, but the minutes didn’t add to perceptions that Australian rates will remain extremely accommodative even should the economy start to recover shortly from the shock caused by the contagion.

As perhaps the most growth-correlated widely traded currency, the Australian Dollar was of course hit hard by the coronavirus global spread. The contagion’s economic effects hit Australia on so many levels from those raw material exports through to long-distance tourism, now on hold. 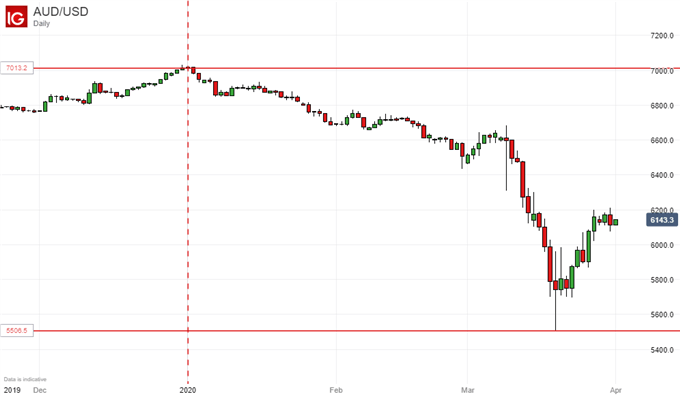 Still, the Aussie benefited from the risk revival seen in the last week or so as governments around the world gird themselves for massive stimulus and economic rescue programs, including of course passage through the US Congress of a $2 trillion package.

Still, even the most powerful stimulus can’t help much while infection rates are rising, and major economies are locked down. The currency will remain very much in thrall to broad risk appetite’s response to coronavirus headlines and it’s hard to see it making durable gains until there’s clear evidence that the contagion no longer threatens world growth prospects.