VIX Recedes into the Weekend After Record-Setting Spike

VIX Recedes into the Weekend After Record-Setting Spike

Volatility exploded on Monday despite an emergency rate cut from the Federal Reserve the day prior, signaling investors remained uneasy about the market’s standing. A similar spike in the US Dollar suggested demand for liquidity was high as traders clamored for the relative safety of the greenback.

Meanwhile, the S&P 500, Dow Jones and Nasdaq 100 suffered drastic declines, triggering circuit breakers and erasing months of hard-fought gains. All in all, market activity in the past two weeks has seen the VIX rewrite the history books, posting five of the index’s ten highest closing levels on record. 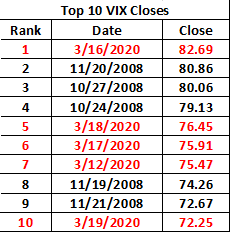 As a result, we can confidently compare the current rout with 2008 which is responsible for the other half of the VIX’s top ten highest daily closes. Now, however, a notable pullback in the VIX index might suggest a degree of normalcy is returning to the market.

Chart created in TradingView. 1-Day rate of change in blue, wick lengths in red and green

To that end, a lower VIX does not rule out further losses, but it may suggest the pace of such losses is slower. Similarly, the short-term bounces the market has been witnessing should also become less drastic. Therefore, if the VIX continues to trend lower next week, it would be an encouraging development for equities moving forward.

That being said, there is little to suggest the VIX will continue lower over the medium term. In 2008 for instance, the initial volatility explosion in October retreated only for another meteoric rise in November to follow. Regardless, a continued decline in the VIX is a necessity for more normal trading conditions.