The Australian Dollar rose on Friday as official Chinese growth figures came in exactly as the market expected.

The country’s Gross Domestic Product rose by an annualized 6% in the fourth quarter for a full-year rise of 6.2%. Growth remains at lows not previously seen since the first quarter of 1992, far below its double-digit pomp of the 2000s. However, there was likely some relief in the market that a 6% pace had been maintained, and some hope that improved trade relations with the United States will allow for some acceleration ahead.

Strong trade data released earlier this week by China has also firmed up the optimism platform, even if eye watering levels of debt remain a powerful underlying drag.

The 6% point is seen, rightly or wrongly, as a level below which the Chinese economy will face heightened financial stresses. The full-year rise of 6.2% was well within the 6-6.5% range targeted by Beijing since last March, when the target was lowered from ‘about 6.5%.’

The Australian Dollar often acts as a bet on Chinese growth thanks to Australia’s raw material exports with China. It seems to have done so in this case with a rise seen before the numbers picking up pace a bit after their release. 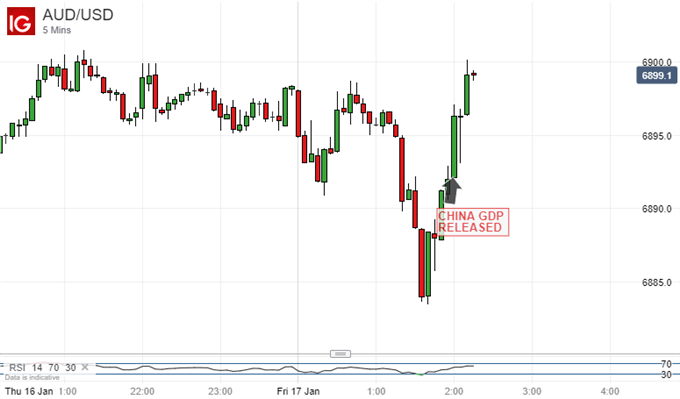 On its broader daily chart AUD/USD continues to bounce from the eleven-year lows made in October.

The currency has beneftted since from general improvements in risk appetite which have stemmed from a variety of major global events, from the signing of a phase-one trade deal, diminished risk of conflict between the US and Iran, progress over Brexit and stronger Chinese trade data. 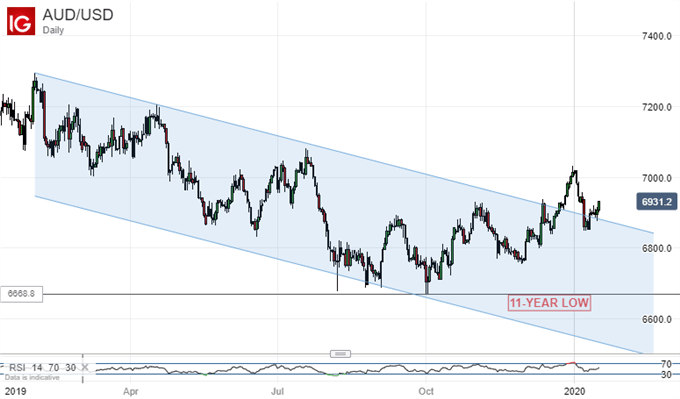 The domestic picture is a little patchier, with the chance of a cut to record low Australian interest rates in February put at a little over 40% by the market. Employment data due next week, and inflation numbers coming up near the end of this month, will give a clearer steer.