The Australian Dollar only edged up on the release of very strong Chinese trade data on Tuesday, but Chinese stocks slipped back, perhaps as the vigor of the data gives Beijing less room for stimulus measures.

In Yuan terms exports soared by 9% on the year in December, hugely more than the 2.9% expected and November’s 1.3% increase. Imports surged by 17.7%, more than doubling the 8.6% rise tipped and blasting past the previous month’s 2.5%

China’s customs agency compiles the numbers and it noted a rebound in imports from the United States but said trade faces ‘a complex external environment’ even as it remained hopeful that growth can be steady in 2020.

It said that the phase one trade deal due for signature in Washington on Wednesday will boost imports from the US, but won’t affect China’s imports from other nations.

The Australian Dollar rose very slightly after the numbers.

The currency can act as the markets top liquid Chinese economy bet but it’s probable that investors opted to sit this strong data out as they await firm details of the trade deal. AUDUSD and indeed NZDUSD retreated earlier, just after the publication of a report from the Politico website, citing a Trump administration official and two others, stating that China would commit to buying substantial US agricultural equipment, as well as energy and targeted industrial goods. It’s not entirely clear why this should have triggered selling and may be the moves were unrelated, but it might be a sign that the deal itself will find it hard to exceed market expectations.

Chinese stocks came under a bit of pressure after the data. That might sound counter-intuitive but investors have a close eye on China’s vast corporate debts. As 2020 gets under way they might be wary of any news so good as to mitigate against further stimulus and lending encouragement from Beijing.

Like most growth-correlated assets the Aussie took a knock last week as military tensions between Iran and the US threatened to boil over. The calm seen since has seen risk appetite return, and AUDUSD seems to have built a durable floor well above the eleven-year lows seen in October 2019. 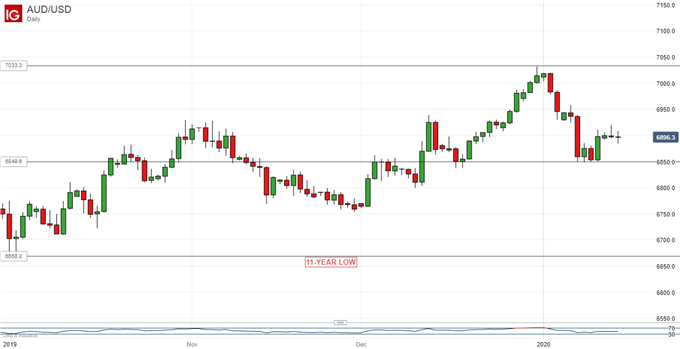 This market is now of course focused on the detail of that all-important trade deal, with a crowd-pleaser likely to see its uptrend resume, perhaps quite strongly at least until the Reserve Bank of Australia’ first monetary policy decision of the year, due in early February. The outcome of that is essentially a coin-toss as far as the markets are concerned, between leaving interest rates alone at their current record lows and trimming them a further quarter percentage point.