What are Safe-Haven Assets and How to Trade Them

Gold recently printed a new multi-year high at $1,611.5/oz. as news filtered through that Iran had launched a missile attack at US targets in Iraq. As we stand, there are no reports of any casualties in today’s attack which Iran says was in retaliation for the killing of Iranian general Qasem Soleimani. Gold then pared gains after Iran’s foreign minister Javad Zariff said that the attack ’concluded measures in self-defense’ and that Iran does ‘not seek escalation of war but will defend ourselves against any aggression’.

I noted in last week’s Gold weekly forecast that while the ‘outlook for gold next week is neutral, the precious metal will remain strongly underpinned in the short-term and may turn sharply higher if tensions in the Middle East escalate further. Next week’s price action, when the market is fully up-and-running after the holiday season, may well be choppy.’Nothing has changed.

Later in today’s session, US President Trump will speak on the latest escalation between the US and Iran and this event should be closely parsed for any clues as to action/s going forward. It may be that Iran’s response today was a ‘one and done’ event in retaliation and that the US may not choose to engage in further military action. This would allow time for tempers to cool. The market seems to be thinking along these lines as gold is now around $30/oz. below its high and back below the 61.8% Fibonacci retracement level of the August 2011 – December 2015 sell-off at $1,586/oz. The precious metal will retain its safe-have appeal, and bid, with the downside remaining limited in the short-term. Any further escalation of action between the US and Iran will see today’s high broken and will open the way, initially, back to $1,685/oz. 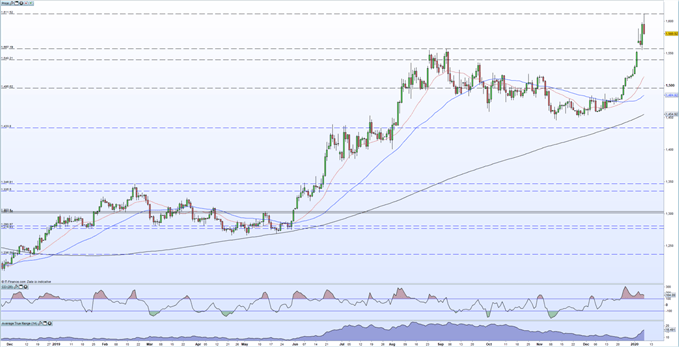 What is your view on Gold – bullish or bearish?? You can let us know via the form at the end of this piece or you can contact the author at nicholas.cawley@ig.com or via Twitter @nickcawley1.