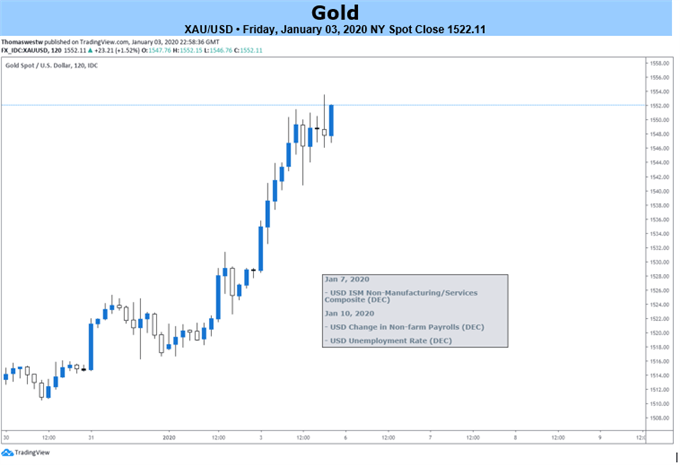 What are Safe-Haven Assets and How to Trade Them

The price of gold has jumped higher in the first couple of trading days in 2020 and is now around $100/oz. higher than the multi-month low set on November 12 last year. A US drone strike has killed top Iranian general Qasem Soleimani, in relation for the recent attack on the US embassy in Baghdad, sending safe-haven sharply higher with gold and crude oil leading the charge. While my outlook for gold next is neutral, the precious metal will remain strongly underpinned in the short-term and may turn sharply higher if tensions in the Middle East escalate further. Next week’s price action, when the market is fully up-and-running after the holiday season, may well be choppy.

Strait of Hormuz: The World’s Most Important Oil Chokepoint

While the US-Iran situation rightly makes most of the headlines, geopolitical risks are rising elsewhere. The Turkish parliament recently approved sending troops into Libya to aid the government in its crackdown on rebel forces, while North Korean leader Kim Jong Un suggested recently that he may pull-back on his self-imposed two-year moratorium on nuclear and long-range missile testing, an action that would test US President Trump’s patience further.

The price of gold hit a $1,552/oz. high early Friday, just below the $1,557/oz. peak made on September 4. This print was the highest since April 2013. With little to no resistance before this high, gold may well continue its rally in the short-term. The weekly chart highlights three prints of resistance between $1,790/oz. and $1,803/oz – made between November 2011 and October 2012 - that may come into play in the medium-to-longer term if the US-Iran conflict worsens. Support for gold in the current geopolitical climate should remain firm in a zone between $1,516/oz. and $1,536/oz.

DailyFX chief currency strategist John Kicklighter recently recorded a webinar on safe-haven assets for 2020, highlighting that, ‘It is important to have a plan for when things go wrong before the crisis hits. Preparation can save an account and even prove profitable for the astute market participant.’

What is your view on Gold – bullish or bearish?? You can let us know via the form at the end of this piece or you can contact the author at nicholas.cawley@ig.comor via Twitter @nickcawley1.