The high-rising Australian Dollar slipped just a little in the wake of official growth data which modestly underperformed expectations.

Third-quarter Gross Domestic Product expanded by 0.4% compared to the second and by 1.7% from the same period a year ago. The annualized reading was exactly as forecast but the quarterly gain was 0.1 percentage point below the 0.5% expected rise. It was also the weakest showing since the final three months of 2019.

Still, these weren’t desperately bad figures in a global economy beset with so much uncertainty, although both household spending and broad capital investment remained weak. The former will no doubt be of concern to the Reserve Bank of Australia as it tries to get inflation back up to target.

Exports were a big help over a quarter which can probably be best described as steady.

AUD/USD put in a little trip after the figures but remains close to highs not seen since the start of November. 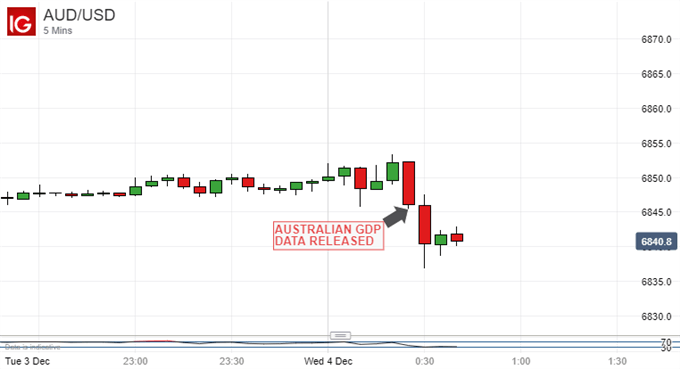 The Australian Dollar has shown notable strength this week, which is perhaps surprising given the doubts still glowering over US trade policy. Australia has arguably as much interest in US-China détente as any third nation given its strong economic and political links with both main players. 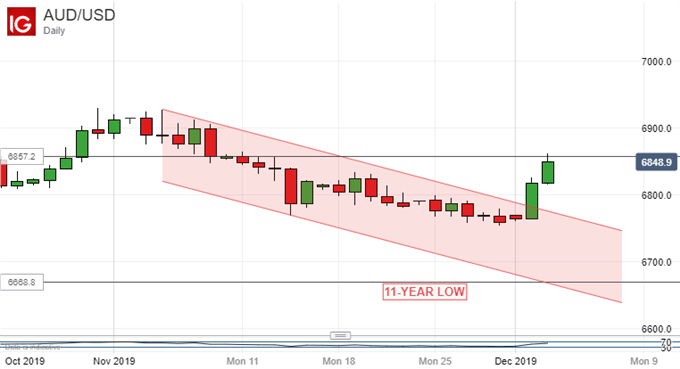 The Reserve Bank of Australia kept interest rates on hold at record lows Tuesday and evinced optimism that gentle recovery was in train. However, the former was priced in and the latter is very much its usual refrain so it must be doubtful that the decision fully explains AUD’s vigor.

It’s more likely that the market has begun to price out some more extreme rate-cut views in the wake of the RBA. The priced-in chance of a rate reduction in February has slipped to essentially even money, from 70% before the decision to hold.

It’s worth noting that the market does still think Australian interest rates have further to fall, and that one major lender, Westpac, thinks that the resulting ultra-low borrowing costs will have to be backed up with Quantitative Easing (QE), to which the RBA has not so far resorted.

RBA Governor Lowe has suggested that the bar to such a move would be extremely high, and that he doesn’t expect to see it crossed anytime soon.