Australian Dollar Gains As RBA Holds Rates as Expected. GDP Up Next

The Australian Dollar gained quite sharply on Tuesday as the Reserve Bank of Australia opted to leave its key Official Cash Rate alone the 0.75% record low in place since October.

The RBA has made three quarter-point reductions to the OCR this year and its latest statement suggests it’s waiting to gauge their effects. The decision to hold steady this month was linked to ‘long lags in monetary policy,’ the accompanying statement said.

The rest of it was pretty standard fare. The RBA noted a ‘reasonable’ outlook for the global economy, with risks tilted to the downside, although in its view they have lessened lately. It flagged again its preparedness to loosen policy if needed and bemoaned the lack of wage pressure.

Given all that, AUD/USD’s sharp rise after the decision was perhaps a little surprising given that, according to ASX data, the chance of no move was put at well over 80% before the fact. 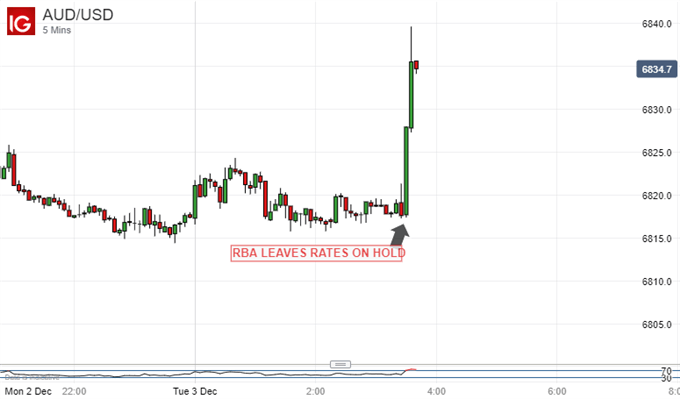 AUD/USD jumped above the upper boundary of a daily-chart downtrend channel which had previously bounded trade since November 1. 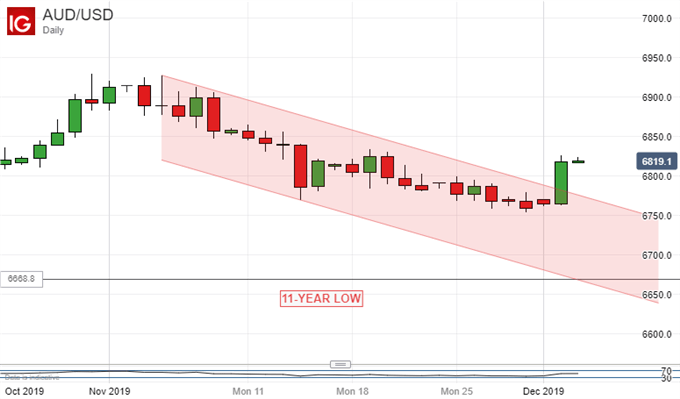 However, that expansion was extremely modest, and the Australian economy is still misfiring on a number of levels, which may make that bounce one to eye with caution.

The country managed a record current account surplus in the third quarter, admittedly, but there’s little evidence that much of that is making its presence felt in key areas like consumer spending.

According to the latest data inflationary pressures have eased further, building approvals seriously underwhelmed and manufacturing activity slipped as did job advertisements.

Data due out on Wednesday are expected to show the economy expanded by 0.5% in the three months to September for an annualized quarterly gain of 1.6%. This would certainly be better than the 1.4% recorded in the second quarter – that was a decade low.

Still, as-expected numbers might well support the RBA’s call for a gradual recovery and might boost the Australian Dollar by making some investors less certain that interest rates will go much lower.