USD: The US Dollar is on the backfoot following yesterday’s Federal Reserve meeting. While the Fed delivered a hawkish cut by signalling a pause in rate cuts going forward, initial gains were quickly retraced after Powell highlighted that “significantly” higher inflation would be needed in order for the Fed to consider raising rates. However, losses have been curbed with safe-havens benefiting from reports this morning out of China that they doubt a long-term trade deal will ever be reached with President Trump. As such, the Japanese Yen is outperforming across the G10 complex, although sizeable option expiries at 108.00 keeps USD/JPY supported. Aside from trade wars, month-end FX rebalancing points to USD selling with buying signals strongest in both the Euro and Sterling, according to Citi.

ISM Manufacturing Could Have a Larger Impact than NFP

EUR: Narrow range (1.1145-75) for EUR/USD throughout today’s session, which has held onto its overnight gains. On the economic front, Eurozone growth posted a better quarterly reading than expected at 0.2% (Exp. 0.1%), potentially signalling that Germany may have avoided a technical recession. Elsewhere, Eurozone inflation remains firmly below the ECB’s target with the headline rate printing in line with expectations at 0.7%, while the core figure saw an uptick to 1.1%.

ZAR: Losses in the South African Rand have extended this morning amid the pullback in risk appetite, while the South African Finance Minister Mboweni noted that Moody’s is looking carefully at the country’s fiscal stance. This comes ahead of Moody’s sovereign rating tomorrow, which is the last rating agency to have SA sovereign credit in investment grade. Of note, a decision to downgrade South Africa’s rating could see USD/ZAR spike to 15.40. 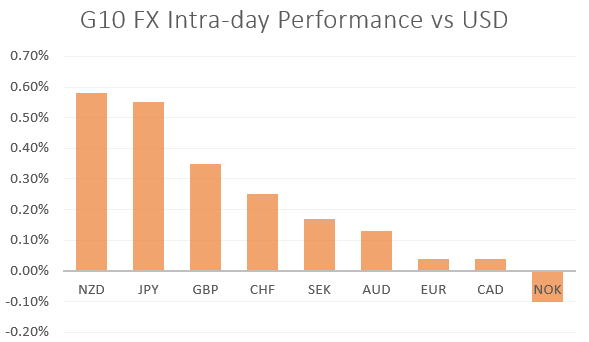