The official October Purchasing Managing Index for the sector came in at 49.3, below market expectations of 49.8 which was also September’s figure.

That was below the key 50 mark which separates expansion from contraction as it has been for much of this year. Fallout from the protracted trade dispute with the United States has hit export growth quite hard and caused economic growth overall to decelerate markedly. The official non-manufacturing PMI was 52.8, below the 53.6 forecast for a composite read of 52.0.

AUD/USD had found significant support earlier in the Asian session from the reduction in US borrowing costs made by the US Federal Reserve. However, the Aussie has been a major currency-market beneficiary of recently improved sentiment around trade-accord prospects between Washington and Beijing, The latest PMI figures simply underline the urgency with which such a settlement is needed. 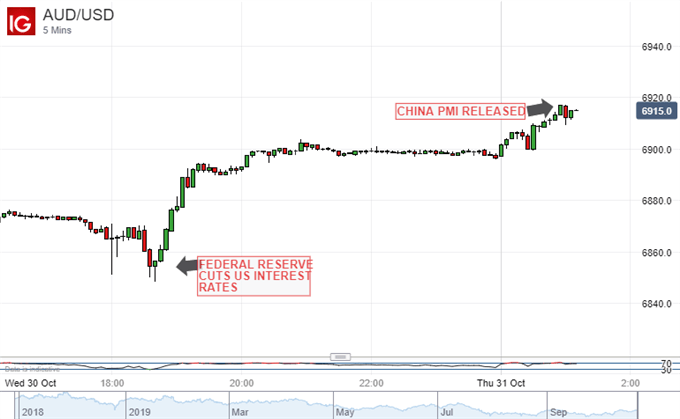 On its daily chart, however, AUD/USD has now passed its previous significant high and the market will now focus on the Reserve Bank of Australia’s monetary policy decision. That’s coming up on Tuesday of next week. Futures market pricing suggests next to no chance that the record, 0.75% Official Cash Rate will be changing, and the prospect of any reduction has been priced as less likely in recent weeks. 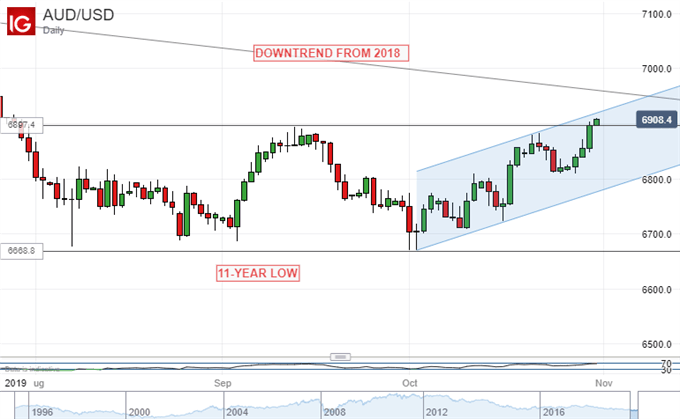 The extent to which any RBA commentary reinforces this view will be crucial. The central bank has recently wondered how much lower rates would really help an economy which has already had a very long period of historically low borrowing costs. However, the RBA won’t necessarily want to lose the Australian Dollar’s interest rate disadvantage against the greenback, fearful that a stronger Dollar would only depress inflation further.