Speaking on a panel in Canberra, Lowe noted that the global economy had slowed and that risks were to the downside still. However he said that it was ‘legitimate to ask’ how effective more monetary easing would be globally and that if everyone is easing, exchange rate effects are offset. In a nutshell cutting Australian rates won’t help boost inflation by weakening the currency if rates head lower in Australia’s trading partners too.

Australian interest rates were cut to a new record low this month, and futures market pricing suggests expectations that the easing process will continue.

The Australian Dollar gained after Lowe spoke, as he appeared to reinforce the message that the bar to deep rate cuts may very well be higher than the markets now think. 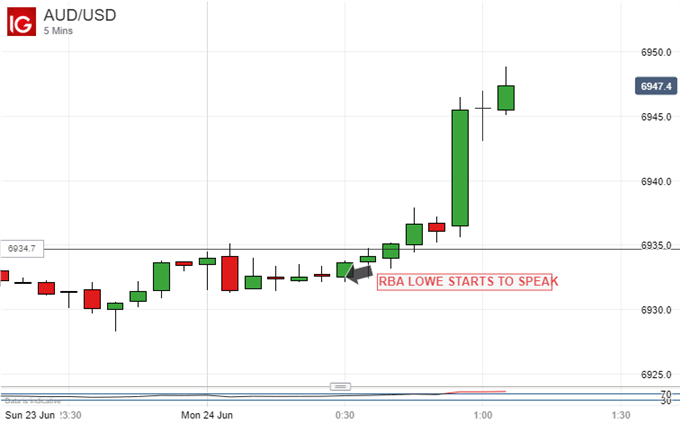 Central bankers around the world have largely kept monetary policy extremely accommodative since the end of the financial crisis. Clearly if long periods of record low interest rates have failed to spur pricing power, it is indeed legitimate to ask whether even lower rates would do the trick.

Lowe also flagged up European banks as a potential weak spot in the world economy. The Eurozone banking sector is fragmented and progress towards some sort of banking union has been glacial at best.

On its daily chart AUD/USD has bounced quite convincingly from its June lows but clearly remains under pressure. The long-term downtrend from early 2018 remains very much in place and the pair seems to be losing momentum before its previous significant peak. 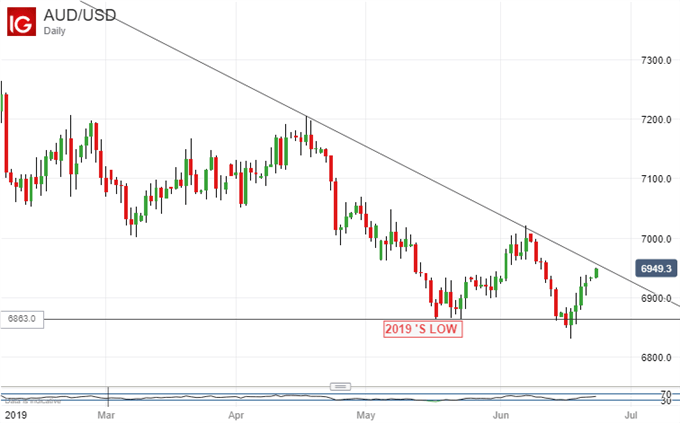 The market clearly sees very little interest-rate support for the Aussie despite Lowe’s warnings that monetary policy cannot be the sole means of economic stimulus.