The Australian Dollar rose last week after the first domestic interest rate cut since late 2016 took the Official Cash Rate down to a new record low of 1.25%.

This is counterintuitive. After all lower rates ought to count heavily against a currency. However, in the Aussie’s case the market had become extremely ‘dovish’ on interest rate policy before the fact. That means investors were certain that the delivered cut was coming. They were and remain pretty sure that rates will yet go lower still. This certainty had reached the point where the only way in which the Reserve Bank could have met it would have been by promising to cut again in July. It was never going to do this so, sure enough, it was read as ‘less dovish than the market’ and up went the currency. 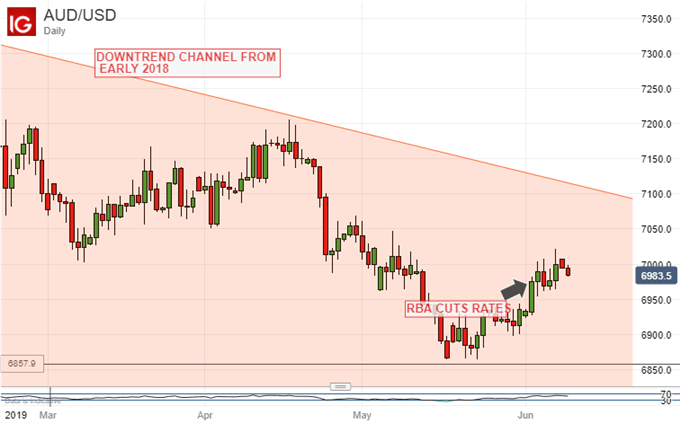 However, Australian rate futures still price in the chance of another cut next month at more than 50%, with yet another reduction penciled in before May next year. That would take the OCR down to 0.75%.

Now on one important level this is not controversial. The RBA is mandated to target annualized consumer price inflation between two and three percent. The last read was 1.3%. Indeed, inflation has made only two, brief quarterly forays above 2% since mid-2014. Looked entirely through the prism of its mandate the case that the RBA should in fact have acted is quite easy to make. Perhaps indeed it should have acted sooner.

Don’t Forget All That Debt

But there’s at least one huge problem here for the central bank. In a word, it’s ‘debt.’ Australian private individuals are already among the developed world’s keenest borrowers. According to data from the Institute of International Finance Australian household debt equaled 127% of Gross Domestic Product at the end of last year, and 189% of disposable income. Both measures are close to record peaks and put Australia either at or very close to the top compared to similar economies.

The RBA will be keenly aware that more than two years of record low interest rates has of course stoked borrowing while not notably stimulating inflation. With too many Australians already horribly in hock, the dangers of encouraging yet more borrowing are clear enough. For its part central bank is betting much on the labor market. That has been a rare, consistent strong point in an Australian economy which remains an astonishing job-creation machine. It’s been a non-inflationary machine too, so far, but the RBA still seems to believe that eventually wage pressures will be seen in the pricing figures.

So, this week’s official labor market statistics will probably be even more notable than usual for Aussie watchers. The jobless rate is expected to have ticked lower to 5.1% in April. While it remains close to that psychologically comforting 5% level, the RBA will probably stick to its line that eventually labor will ride to inflation’s aid. The market may well get the one more rate cut it’s expecting, but action beyond that seems far less certain.

The combination of high private debt and strong job creation might make the bar to deeper cuts much higher than the market now thinks.