The Australian Dollar gained following news that official Australian consumer price inflation figures came in as markets had expected for the third quarter.

The Consumer Price Index rose by 0.5% on the previous quarter and by 1.7% on the year. The former was a modest deceleration, the latter a small increase. The core inflation trimmed mean measure rose by 0.4% and 1.6%, respectively, again in line with consensus.

What all of that means is that inflation remains well below the Reserve Bank of Australia’s 2-3% target band, as it has for much of the time since 2015. What it also means is that the picture is developing very much as the RBA has suggested that it would, which means that there is likely to be little change to the market’s view that the record low 0.75% Official Cash Rate may have further to fall yet.

AUD/USD made gains on the release, having slid notably into it. Some in the market were clearly hoping to get ahead of what they feared might be more weakness, but that weakness never materialized. 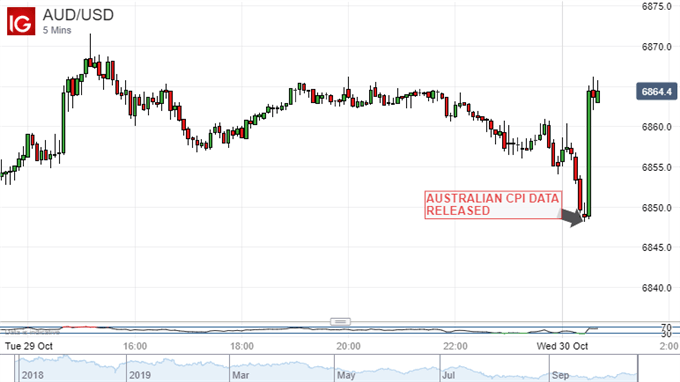 On its broader, daily chart the pro-risk Australian Dollar has made gains through October as the market becomes more optimistic on the chances of a US-China trade accord and, perhaps more to the point, more certain that US interest rates will head lower. 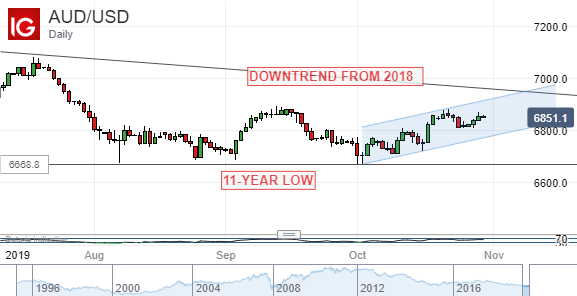 However, the unit also remains very close to eleven-year lows against the US Dollar, and well within the long downtrend in place since late 2018. Inflation remains stubbornly low, and the RBA may well be concerned to keep the interest rate gap between it and the Federal Reserve in place, lest a strengthening Australian Dollar depress inflation further.

Given Australia’s vast consumer debt, the efficacy of further interest rate cuts must be in doubt, indeed the RBA Governor himself has said as much. However, for as long as such cuts are priced in, it is hard to see the Australian Dollar recovering meaningfully.