The haven asset proved resilient to renewed equity market optimism which was founded in turn on hopes of trade-deal progress between China and the US. However, the market is also looking ahead to this week’s monetary policy call from the Federal Reserve. A cut in US borrowing costs is now very broadly priced in but the market remains convinced that more cuts are coming and, for as long as that’s the case, gold is unlikely to fall very far.

Palladium outperformed once again within the precious metals complex after making record highs this month. It’s a key part of automotive catalytic convertors and the market is wrestling with limited supply.

Plenty of key Asian markets from New Zealand to Singapore were closed for holiday Monday.

Crude oil prices slipped back a little through the Asian session, but a little profit-taking was perhaps unsurprising given that last week saw the biggest weekly gain in over month, founded in a surprise drawdown of US inventory. There is also held to be some chance that traditional producers will agree to cut output again at the end of this year.

Question-marks still hover over the durability of end-demand in a slowing global economy however, and gains are likely to remain fragile.

Spot prices have broken above the daily chart downtrend in place since September’s six-year highs. However, they have hardly yet done so conclusively.

Still it seems likely that the continuation, pennant formation visible on the charts in the past couple of weeks has broken and that further gains may now be likely. This may be at odds with overall risk profile in the market however, which may well continue to favor riskier, higher yielding assets. So, some caution may be warranted even as prices hold above that downtrend.

After that strong run of gains last week US crude prices have punched well above the top of their previous daily chart trading range. That came in at $56.57/barrel. 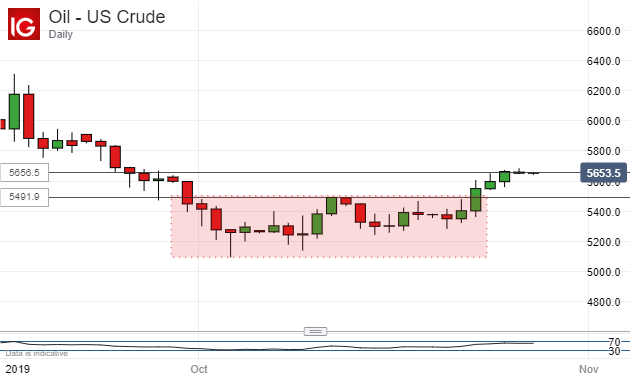 The price is now back up to levels not seen since the end of September but with $58.00 barrel offering the next upside target and, probably, considerable psychological resistance. A particularly dovish showing from the Federal Reserve this week could bolster demand hopes in the oil market, but it’s worth bearing in mind that the market is already extremely dovish itself and the central bank may struggle to exceed rate-cut expectations here.