Crude oil prices slipped back Friday in Asia after three session of gains. A surprise US inventory drawdown gave them a push on Thursday but now investors seem to be back to worrying about likely end demand in a world where trade is clearly slowing.

As just the most obvious signs of this, Chinese growth decelerated to near three-decade lows in 2019s’ third quarter while German economic activity remains sluggish. With no end in sight to either the US-China trade confrontation or Britain’s agonizing exit from the European Union, oil bulls must look for comfort where they can.

The prospect of new production cuts in December may be providing the market with a little support, as is the strong prognosis that the Federal Reserve will cut interest rates once more next week. Friday’s US day will bring news of the US oil industry’s current state of health when the Baker Hughes rig count is released.

The weekly count of operating rigs has been sliding sharply since January but has shown signs of bottoming out in October.

Those same US rate-cut bets continue to support gold, a non-yielding asset which tends to do well when bond returns come under pressure. Spot prices retreated very marginally from the two-week highs of Thursday but remain well supported by the market.

The coming US session doesn’t offer much in terms of data but the University of Michigan’s consumer sentiment snapshot for October will probably merit attention. The Fed won’t make its interest-rate call until Thursday next week.

Prices remain well above their previous downward channel and, perhaps more pertinently, above their former range top. However, some quite strong gains this week have not bought a conclusive break of that latter level and it will be fascinating to see whether they can hold up through quite a light trading session of economic data. End-demand worries will not be easily shaken off and it would be no surprise to see that range reassert itself, even if the base remains well below the market. 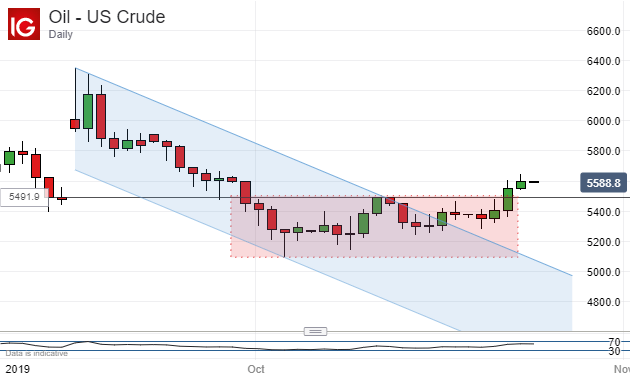 Spot gold is still, just within the daily-chart pennant formation which has been building since at least late September.

This confluence of up and downtrend lines is usually known as a continuation pattern, meaning that the chart move which preceded it should resume once it breaks. This suggests, just, that Gold should be bound a little higher once the pattern is history, and the current upside test would support that view, if it’s sustained into the end of the week.