The Australian Dollar spiked upward then retreated after the Reserve Bank of Australia cut its key Official Cash Rate by a quarter of a percentage point to a new record low of 0.75%.

The move was widely expected and, although of course lower interest rates shouldn’t support a currency, the RBA was no more dovish than usual in its accompanying statement, leaving the further rate cut expected by the market next year very much in the balance.

The central bank stuck with its assessment that it is reasonable to expect an extended period low interest rates, and that a ‘gentle turning point’ appears to have been reached in the economy. It also said that inflation pressures remain subdued, with consumer price rises likely to be below 2% this year and slightly above it next.

The central bank did say that it was ready to add more stimulus if needed. All up this looks like a situation in which the RBA is certainly dovish on interest rates, but probably less so than the market. That likely accounts for the Aussie Dollar’s initial gains. 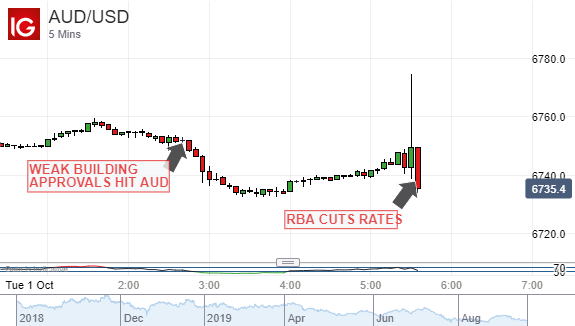 AUD/USD had been hit earlier by weakness in domestic building approvals. They slumped by 21.5% in august, after at 28.2% slide in July.

More broadly Asia Pacific stocks found support Monday, probably thanks to events in the US. The S&P 500 may have only enjoyed modest gains in the year’s third quarter, but it has also managed its best year-to-date gains for more than twenty years and kept the longest bull run in history on track.

Apple suppliers also made gains around the region, thanks to the California-based tech titan’s Monday gains on a price-target upgrade from JP Morgan. Markets in China and Hong Kong were closed as the 70th anniversary of the founding of the People’s Republic of China was marked with a vast parade in Beijing.

There was some regional gloom around, too. The Bank of Japan’s Tankan survey for the third quarter found sentiment at large manufacturers at its lowest level since June 2013. Even so it wasn’t quite as bad as markets expected, but confidence has weakened for three straight quarters.