US Vice President Mike Pence is currently talking at the podium about US-China trade relations following the recent ‘phase 1 trade agreement’ breakthrough. Pence stated that the US recognizes China as a strategic and economic rival but notes that the US and Trump administration are ready for a new future regarding Sino-American trade relations if China can end unfair practices.

VP Mike Pence added that the White House is not seeking to ‘de-couple’ from economic ties with China yet commented how the NBA is ‘acting like a wholly owned subsidiary’ in China while stating that ongoing issues in Hong Kong is curtailing human rights and freedom of liberty. Pence also made a point that the US stands by pro-democracy protestors in Hong Kong. Moreover, the vice president said how opioids like fentanyl are still flowing across Chinese borders into America despite promises made by Beijing to restrict its access and clamp down on production.

Pence’s remarks only grew more hawkish on China as his speech progressed. America’s second-in-command stated how China’s military actions remain provocative and that minorities in China are struggling against the Chinese communist party. Furthermore, VP Mike Pence noted how China continues to aid and facilitate the theft of US intellectual property – a major issue outstanding between the US and China that may cause recent trade war progress to quickly unwind as negotiators try to tackle differences on these stickier issues. Nevertheless, Pence stated that President Trump remains optimistic that a US-China trade agreement can be reached. 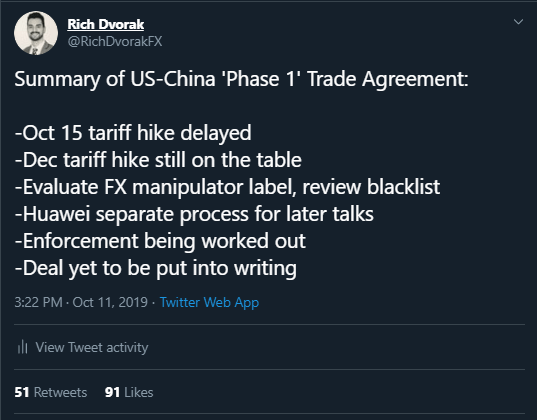 The details above on the US-China Phase 1 Trade Agreement as outlined by President Trump following high-level trade talks in Washington earlier this month is in addition to ‘significant’ agricultural purchases promised by the Chinese. Although, language from the White House and Beijing on recent trade progress differs quite materially. For example, the Chinese have stated willingness to purchase 20 billion tons of soybeans, which is far short of the 50 billion previously touted by Trump.

Additionally, other White House officials have begun to shy away from the idea of President Trump and President Xi signing a formal phase 1 trade agreement at the upcoming APEC Summit in Chile next month. That said, another tranche of tariff hikes are still set to go into effect this December, which could provoke a rise in US-China trade tensions in the near future. 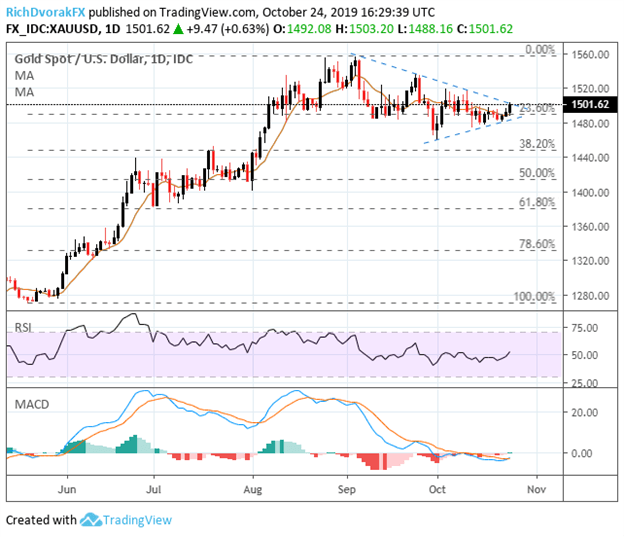 The price of gold edged higher as Pence spoke and helped pushed the precious metal back above the psychologically-significant $1,500 threshold. The hawkish commentary from VP Mike Pence could cause the ‘winds to shift’ from US-China trade progress being made to US-China trade tensions are back on the rise, which could boost gold prices largely due to an influx of safe-haven demand. 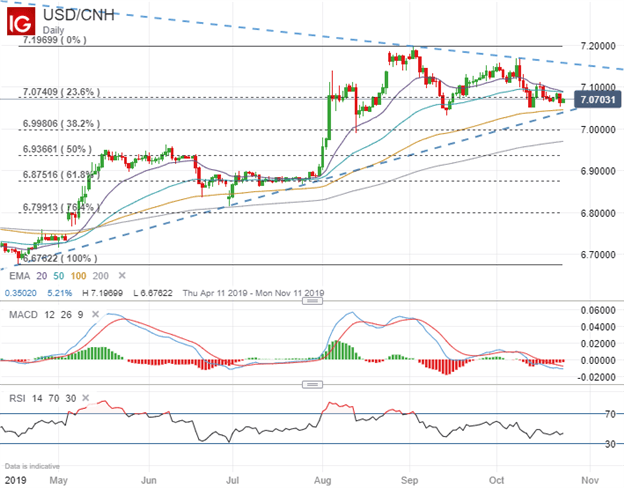 The Chinese Yuan (CNH) has gained ground relative to its US Dollar counterpart as Sino-American trade tensions thaw, though spot USD/CNH could be showing signs of a bottoming attempt near the 7.0500 price level. The Chinese Yuan could come under further pressure if the US-China trade war begins to escalate again as the PBoC intervenes to offset the impact of Trump’s tariffs.

Read More - Yuan Rallies on US-China Trade Deal Hopes But Will It Last?