Gold prices held above the $1490 handle through Asia’s Thursday session with the market deriving support from the usual duo of economic uncertainties – US/China trade and Brexit.

Beijing and Washington remain in touch on the trade issue but progress toward a lasting settlement is glacial. The US corporate earnings season has already provided plenty of evidence that weakening China sales are hitting bellwether firms. There’s regional evidence too. South Korea’s growth fell in the third quarter, with sluggish global trade cited.

European Union leaders appear ready to grant yet another Brexit delay, but the situation remains fluid and the UK may see another election before that period ends.

These factors are supporting gold, as is the prospect of lower interest rates from the Federal Reserve, expected when it sets policy on October 30. A quarter-point reduction is now regarded as virtually certain.

Crude oil prices slipped back a little as worries about real demand reasserted themselves. They rose in US hours Wednesday on news of a surprise inventory drawdown. The Energy Informaiton Administration said that inventories fell by 1.7 million barrels last week, when analysts had looked for a build of over 2 million.

The result came in contrast to earlier data from the American Petroleum Institute which had showed an increase of over 4 million barrels.

Spot gold remains close to its September peaks on the weekly chart and they in turn are the highest point reached since mid-April.

However, the gradual downtrend seen since then remains very much in command. The coming weekly and monthly closing levels are likely to prove instructive in relation to it. 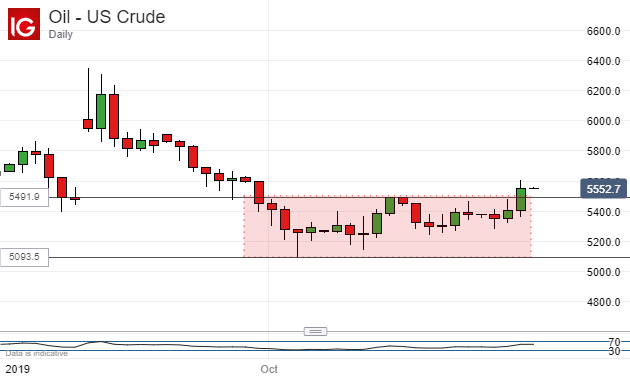 However, this break can hardly be regarded as conclusive yet, with its durability into the week’s end again something to watch. While both the macroeconomic and corporate data are attesting so loudly to weakening global demand, it is hard to see prices staging any significant march higher. Of course production cuts may do the trick, and they may come when OPEC meets in December.