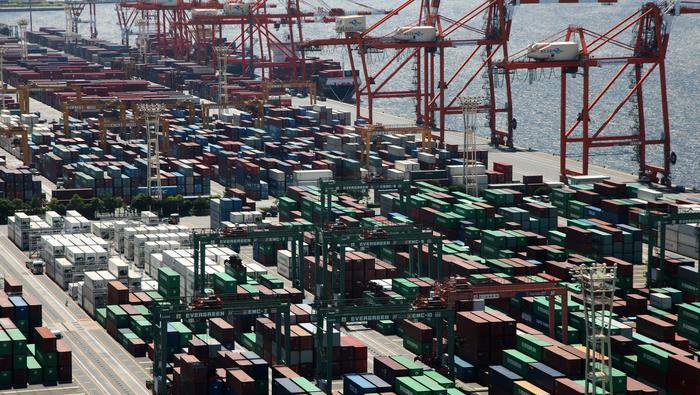 The latest US earnings season has shown clearly that trade tensions with China are no longer a theoretical threat to growth, but a serious drag already in place.

Heavy plant maker Caterpillar has long been regarded as a bellwether for the state of trade between the two national titans.

It reported on Wednesday a major slide in Asian sales, driven by weaker demand from China. And it was only the latest big company to sing from this sad hymnal. Ford managed an enticing earnings beat, but warned investors not to get too excited. Falling demand from China was going to hurt for the remainder of the year, it said.

To some extent the corporate sector is merely catching up with what official macro numbers have been telling us for a while. China’s economic growth was right on the psychologically crucial 6%-annualized level for the third quarter. The International Monetary Fund thinks it will scrape in at 6.1% this year and slide to 5.8% in 2020. These are the sort of figures which China hoped it had left behind in the early 1990s.

The effects of a trade slowdown are being felt beyond the two main protagonists, with exports in Japan and South Korea also hit. There are also clear signs that companies and investors are stockpiling cash, fearful of committing to invest in an environment of such uncertainty. Aside from the obvious likely hit to growth down the road should this trend continue, the whole point of loser monetary policy is to force the deployment of cash. So far this is not happening.

The Markets need a Settlement, Can Politicians Deliver it?

It might be comforting for overall market risk appetite if it were clear that the two sides were responding to these worrying signs with urgent measures to stabilize trade relations between Beijing and Washington.

Unhappily, while talks continue, the prospect of a solid trade deal remains in the province of an unknowable future.

Such a thing would no doubt prove a powerful near-term propellant for growth-sensitive currencies such as the Australian and New Zealand Dollars. It might even draw a line under the rush of monetary easing now in play around developed markets. Industrial commodities would gain sharply and the long post-crisis equity bull market would doubtless surge into resplendent old age.

However, while a deal remains elusive, markets will remain extremely vulnerable to both headlines on the subject and media interpretation of them. That means both rises and falls in major traded assets will be subject to extreme caution. There’s also a worry that, the longer we go with no settlement, the less likely it is that a meaningful deal can be done.

Perhaps the clearest example of this can be seen in the Australian Dollar/Japanese Yen cross and this is not surprising. With a growth-sensitive ‘risk currency’ on one side and perhaps the foreign exchange world’s key countercyclical asset on the other, this pairing is tailor made to give a snapshot of overall risk appetite. 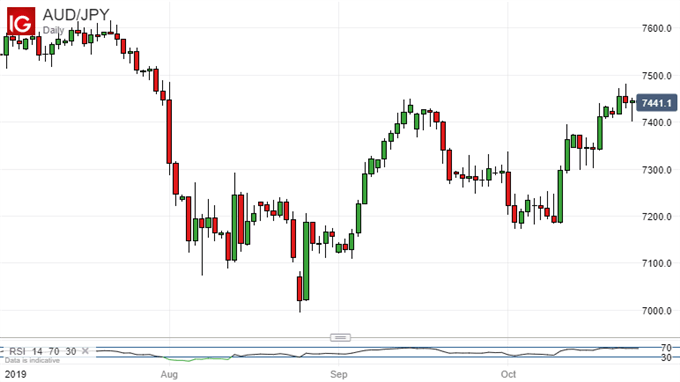 The daily chart clearly shows the roller-coaster risen AUD/JPY has been on since August as trade hopes have waned and risen again. For the moment the cross is rising reasonably high, suggesting investors have not given up on progress and, in any case, are looking ahead to this month’s US monetary policy call where a stimulative interest rate cut is expected.

Clearly there are massive trading opportunities here for those brave enough to try and call those swings. But for as long as the fallout from trade war continues to shower down on all sections of the global markets, that bravery is going to be necessary.