For the rest of the week, global markets may have to contend with significant volatility as several central banks prepare to announce their rate decisions against the backdrop political turmoil and flailing oil markets. In Brazil, policymakers are anticipated to cut the benchmark Selic rate by 50 basis points, leaving it at an all-time low of 5.50 percent. Markets are expecting for interest rates to be as low as 5.00 percent by year-end. 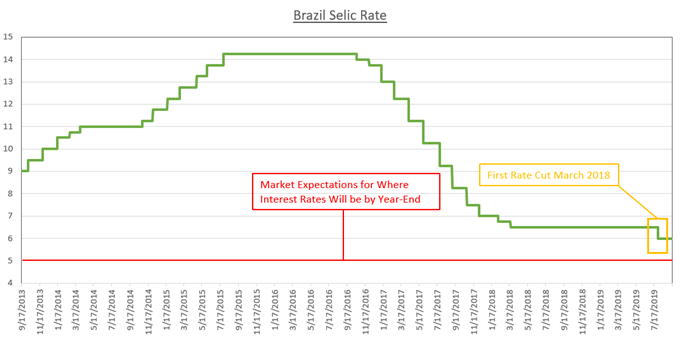 Economic ailments from 2018 spilled over into 2019 as the country wrestles with passing key pension reforms that could be only thing standing between them and a recession according to Finance Minister Paulo Guedes. Foreign direct investment has made a significant recovery after plummeting to six-year lows on a quarterly timeframe, and geopolitical oscillations and wobbly growth prospects has kept investors on their toes.

Lackluster growth and weakening demand for iron ore out of China – Brazil’s largest trading partner – has caused previously “symmetric” inflationary pressure to now tilt to the downside. Uncertainty about progress on the structural reforms has been a key factor behind waning consumer and producer confidence. BCB policymakers – much like the BoE and Brexit – are somewhat constrained by the local political environment.

Source: Bloomberg. Note: Decline in bond yields and CDS spread during election signaled markets were optimistic about Bolsonaro’s pension reform and the ability of his government to stabilize the country’s finances.

The headline event risk for the week will be the FOMC rate decision with overnight index swaps pricing in an 85.4 percent chance of a 25-basis point rate cut. However, the market’s ultra-dovish expectations for further easing could be once again cooled by Mr. Powell who has reiterated for the past year that the central bank is on a data-dependent path.

What is more telling, however, is how the US Dollar has performed against this backdrop. Despite market expectations growing increasingly more dovish, the Greenback has continued to rise. This suggests that the US Dollar’s appeal as the most liquid currency is rising, possibly indicating underlying premonitions about future market conditions. 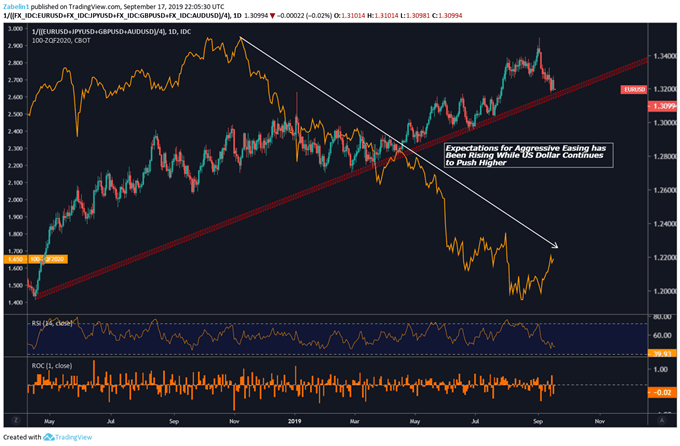