Ahead of the August RBA minutes release, Australian Dollar overnight implied volatility measures ticked higher across the board but appear relatively muted in comparison to average readings over the last 12 months. While the publication will certainly reveal details of the central bank’s latest monetary policy decision and appetite for further accommodation, low Australian Dollar overnight implied volatility readings might suggest that the August RBA minutes may lack market-moving potential. 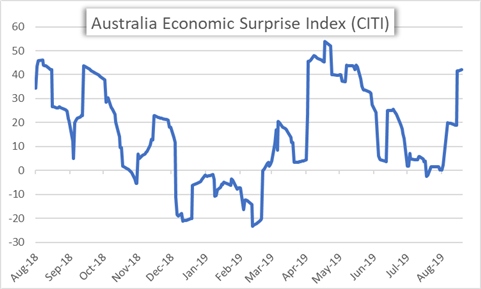 Since the August RBA meeting where the central bank left its policy interest rate unchanged at 1.00% after cutting by 25-basis points in both June and July, the Australian Dollar’s fundamental backdrop turned a bit rosier. This has been driven largely by the positive US-China trade war developments following Trump’s tariff delay in addition to the blockbuster Australian jobs report that crossed the wires last week. 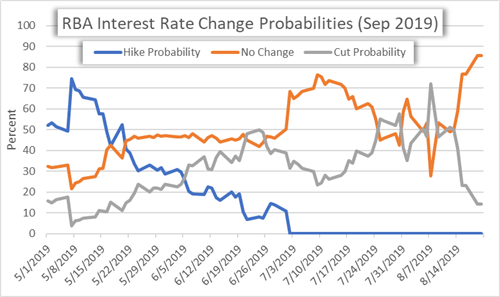 Unsurprisingly, the apparent deceleration in trade tensions between the US and China combined with better-than-expected economic data out of Australia have sent traders unwinding RBA rate cut bets for its September meeting. In fact, the probability of a September RBA meeting rate cut has plunged from 72% on August 7 to 14.4% today. That said, the Australian Dollar still stands to be impacted by the August RBA minutes depending on the relatively hawkish or dovish tone communicated regarding monetary policy outlook – particularly the central bank’s openness to cut interest rates further to combat excess labour market slack and lingering trade war uncertainty. 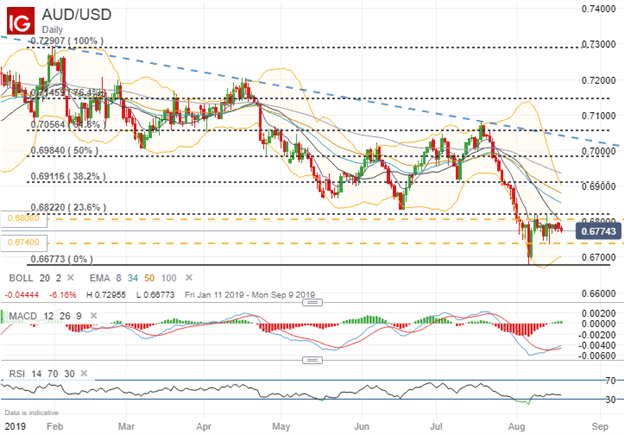 AUDUSD overnight implied volatility of 7.07% can be used to calculate the currency pair’s 1-standard deviation trading range of 0.6740-0.6808. Despite the Aussie’s positive fundamental developments over the last week, spot AUDUSD has struggled to reclaim the 0.6800 handle and remains a daunting level of technical resistance. Also, aside from the option-implied lower bound of 0.6740, last week’s low of 0.6736 could keep a lid on potential downside – particularly with USD traders likely sidelined ahead of Jackson Hole slated to kick off Wednesday.

After markets digest August RBA minutes, traders will turn to the Jackson Hole Symposium where RBA governor Lowe will be speaking alongside other global central bankers over the weekend. Also, Aussie PMI data on tap for release Wednesday could move the needle for Australian Dollar currency pairs. Until then, changes in IG Client Sentiment could provide insight on where AUDUSD might head next. 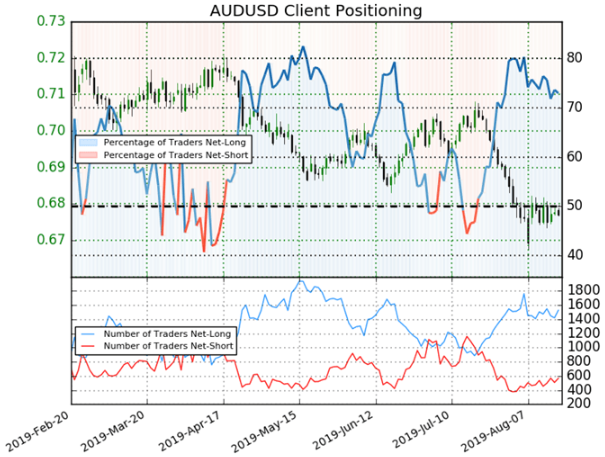