Prior to the August Reserve Bank of Australia meeting, there was a 44% chance of a 25-bps interest rate cut in September. After the August RBA meeting, at the end of last week, there was a 47% chance of a 25-bps rate cut. But with US President Donald Trump announcing a détente in the US-China trade war – the proposed 10% tariffs on $300 billion of imported Chinese goods has been delayed from September 1 to December 15 – speculation around major central banks’ easing cycles has been severely curbed.

Now, interest rate markets have eased off those dovish expectations compared to where they were before and immediately after the August RBA meeting. There is a 77% chance of no change in rates at the September RBA meeting. If the August RBA meeting minutes produce weakness in AUDUSD, it may be limited given that the tone around the US-China trade war has evolved. 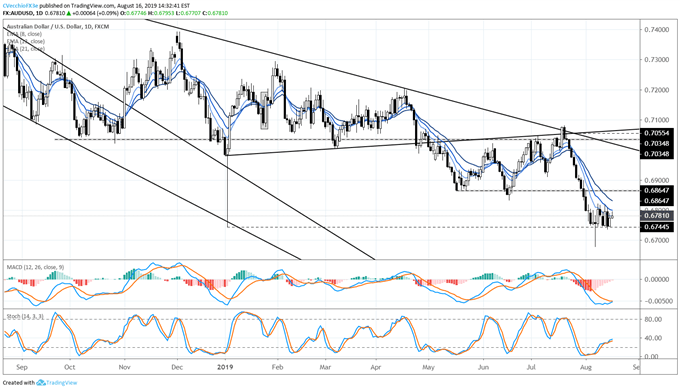 In our last AUDUSD technical forecast, it was noted that “until the daily 8-EMA is breached – AUDUSD has closed below it every session since July 23 – there is little reason to look higher.” The daily 8-EMA was breached with a close above it on August 13, even though there has yet to be follow through to the topside. Now, the daily 13-EMA is shoring up resistance; it has not been breached since July 23 on a closing basis either.

While AUDUSD is still below its daily 8-, 13-, and 21-EMA envelope, daily MACD has turned higher (albeit in bullish territory) while Slow Stochastics continue to climb towards neutral. Although the bias may still be for lower AUDUSD prices, traders may want to see how the recent high/low range between 0.6736 and 0.6822 breaks before choosing a direction. 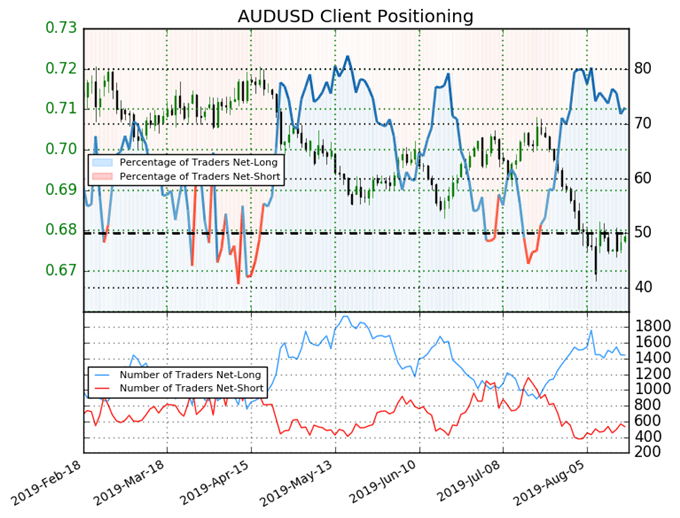