A series of relatively hawkish comments from Fed Chairman Jerome Powell followed an expected 25-basis point cut to the Federal Funds rate Wednesday, sparking a brief selloff across US equity markets. During the press conference, the Dow Jones momentarily sank 500 points before rebounding somewhat. Rolling into the close, losses were widespread with the Dow Jones down -1.2% versus the -1.1% and -1.3% losses for the S&P 500 and Nasdaq 100 respectively. As the dust settles, market participants will now have to decide whether the new monetary policy outlook constitutes trend continuation higher or an extension of Wednesday’s bearish reaction. 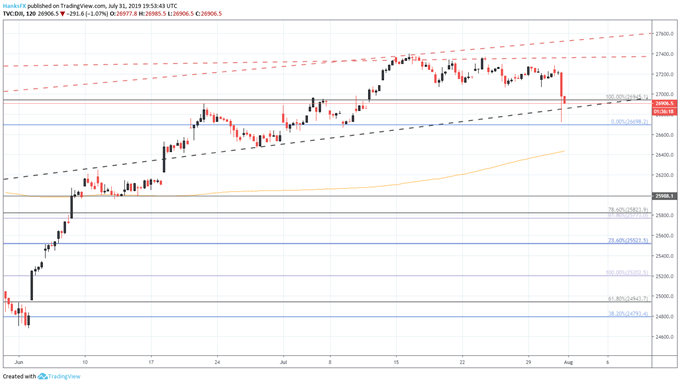 Either way, the Dow Jones exhibited adherence to multiple technical levels in the session which suggests they will continue to influence the DJIA in the coming days. In the event stocks continue lower, the Dow may look for support near the ascending trendline from February and the 26,698 level – April’s swing high. Should both levels falter, subsequent support is relatively sparse until the 26,000 area. Conversely, a rebound higher will have to surmount the two levels that have kept the Index contained up to this point. That resistance is marked by two ascending trendlines of varying slopes at the 27,400 and 27,550 levels 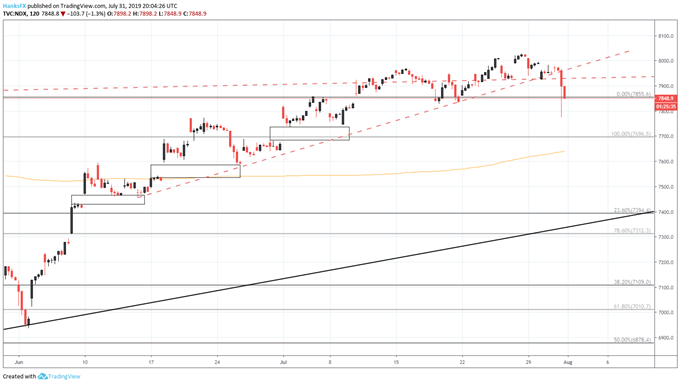 The Nasdaq 100 also displayed its regard for technical influence by closing at prior all-time highs around 7,850. Critically, however, the tech-heavy Index slipped beneath two trendlines that previously posed as support. Moving forward, the two technical levels will now look to resist any attempted rebound by the Nasdaq. For more updates and analysis on the developing price action, follow @PeterHanksFX on Twitter.

Sign up for our Weekly Equity Outlook Webinar to gain earnings insight and stock market analysis through the lens of global macroeconomic trends and monetary policy.

On the other hand, a continuation of Wednesday’s move lower in Thursday trading could begin to accelerate given the lack of nearby technical support. Further, a series of unfilled gaps from price action that evolved in June could exacerbate any declines. With that in mind, 7,700 is an important level to watch as it likely possesses a modicum of buoyance and could thwart an attempt to fill the gaps down to the 7,400 level. 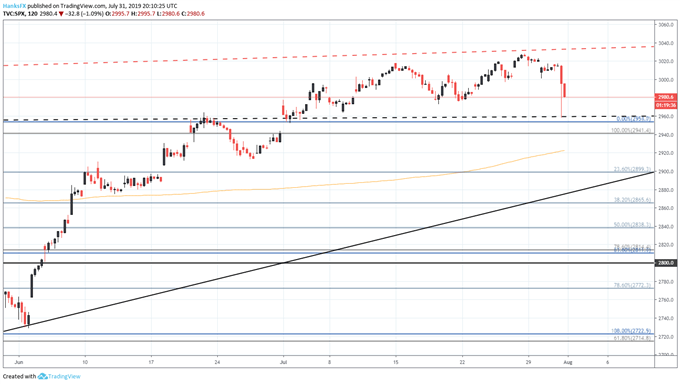 While technical influence was displayed across US equities, perhaps the cleanest price action was witnessed on the S&P 500. Relatively hawkish remarks sent the Index down to the 2,960 level quickly, which marks four prior highs in September and October of 2018 along with the high in May 2019 and the swing high in the middle of June.

Evidently, the level carries significant technical merit and will look to pose the first zone of support in a renewed attempt lower. A breach beneath could open the door to further losses as the technical foundation becomes unsteady. Should bearishness continue beneath 2,960, the ascending trendline from late December will look to keep the S&P 500 afloat – as it did for the DAX 30. To the topside, initial resistance will likely be offered at the 3,000 psychological level before the Index could look to challenge the ascending trendline that stalled price earlier this week around 3,040.