Spot GBPUSD is down a little less than 1% after a rocky ride so far for 2019. The Pound Sterling recorded a proverbial “rip-and-dip” from the 1.26 handle to 1.34 before falling back again to 1.25 where spot GBPUSD trades currently. Price action in the British Pound has largely been driven by the latest Brexit developments with the odds of a no-deal departure largely dictating the currency’s direction. 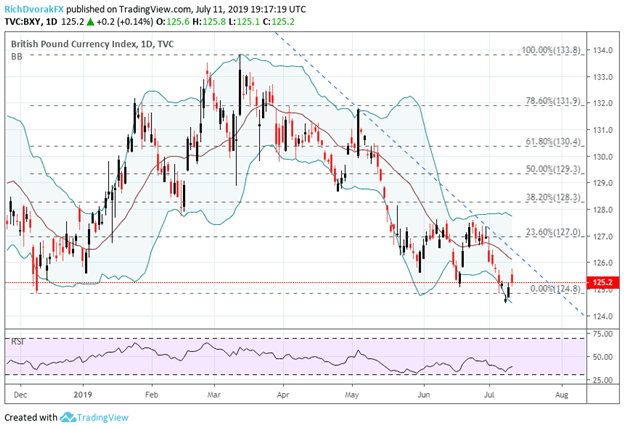 Similarly, this pattern is also mirrored in the broader British Pound Currency Index (BXY). The steep slide in the Sterling since March 2019 could be starting to show signs that the drop is losing momentum and GBP prices could turn higher as suggested by the relative strength index (RSI). A possible upside target could be a tag of the downtrend resistance line. If this level of technical resistance can be overcome, it likely opens up the door to test the 23.6% Fibonacci retracement level highlighted in the chart above. This upside potential is reflected by a healthy rebound off confluence where the British Pound previously bottomed back in December 2018 when spot GBPUSD sunk to its lowest level since June 2017 as currency traders reacted to news that the Brexit vote was canceled.

While spot GBPUSD climbed during the first three months of 2019 on hopes that UK Parliament would back Prime Minister Theresa May’s Brexit deal negotiated with the European Council, the ongoing impasse in the House of Commons sent the currency pair subsequently swooning. The move lower accelerated as the risk of leaving the EU without a Withdrawal Agreement grew larger after failing to pass a Brexit deal on three separate occasions. 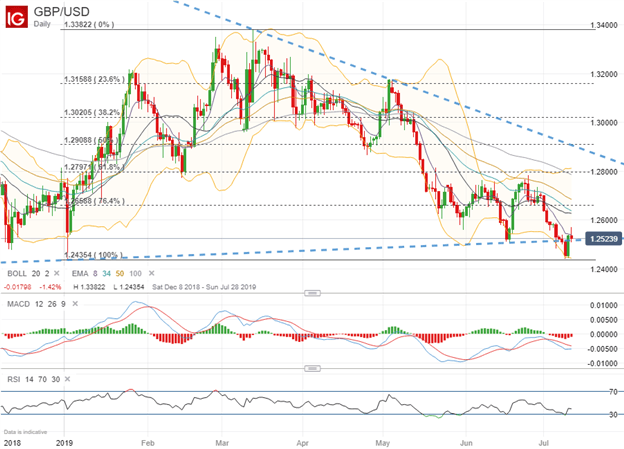 Bearish price action in spot GBPUSD was then exacerbated by reports that PM May would step down from her position which injected another layer of uncertainty into UK politics. Now, it seems that MP Boris Johnson is set to top the PM election which again increased the market’s fear of no-deal Brexit and has weighed negatively on the British Pound. In the latest Financial Stability Report released by the Bank of England, the central bank stated that “significant volatility and asset price changes are to be expected in a disorderly Brexit.”

Although, with Boris Johnson appearing very likely to win the leadership contest, this scenario is largely priced in by markets already. That said, there are upside risks to GBPUSD such as contender Jeremy Hunt may garnering additional support in the polls as the voting deadline approaches, whereas Boris Johnson could soften his Brexit hardliner rhetoric which may also reverse some of the recent downside in the Sterling. 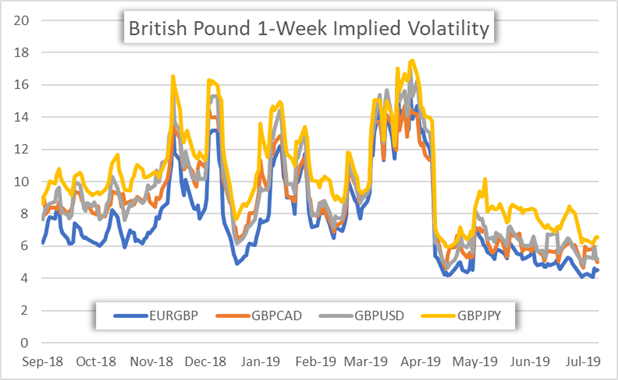 Furthermore, falling 1-week GBP implied volatility measures also suggest the possibility that the British Pound has potential to rebound higher over the near-term. Also worth mentioning, UK economic data has remained relatively upbeat on balance. BOE Governor Carney has stated several times that interest rates appear low in the event that a Withdrawal Agreement is reached and that rate hikes could be warranted if no-deal Brexit is taken off the table.