The Pound Sterling is clinging onto Tuesday’s gains following news out of the UK that Boris Johnson remains the favorite to take over as Prime Minister once Theresa May formally steps down from the leadership position. Today’s results widely matched the first round of UK leadership contest votes which listed Boris Johnson as the clear frontrunner who is followed by Jeremy Hunt and Michael Gove as the respective second and third favorite candidates. 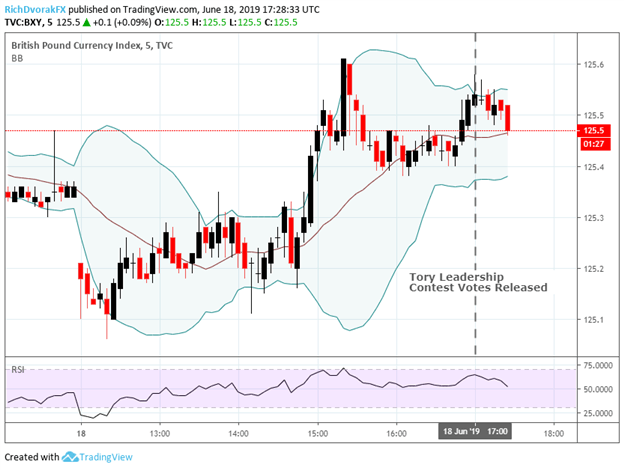 While the British Pound climbed throughout most of today’s session owing to broad weakness in the Euro and US Dollar on the back of dovish central bank expectations, GBP gains could be short lived. Additionally, it is worth noting that Wednesday’s inflation data out of the UK in addition to Thursday’s BOE meeting threaten to stir sterling price action over the near-term.

Another round of PM leadership votes will take place in the UK tomorrow and a fourth round scheduled for Thursday. If more than two candidates remain after Thursday’s results are announced, another set of votes will take place. While the Tory leadership contest is still ongoing, the risk that a Boris Johnson-led Parliament might steer the UK down a path towards no-deal Brexit has dragged the sterling lower and largely contributed to the recent slide in GBPUSD and ascent in EURGBP. This trend looks to continue and keep the British Pound subdued with Boris Johnson leading the pack to take over as next UK Prime Minister. 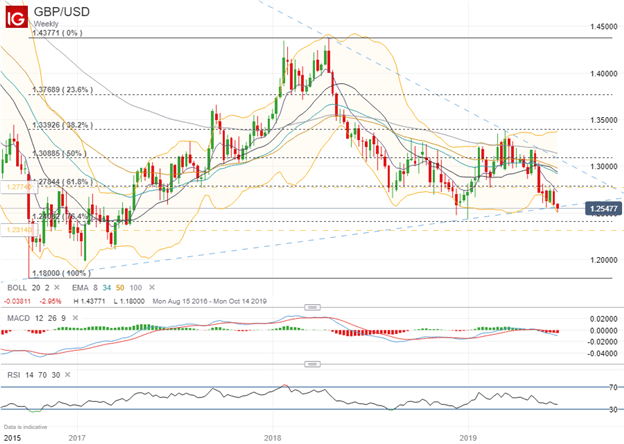 As it currently stands, the final leadership contest vote will take place in approximately 1-month on July 22. That being said, GBPUSD is estimated to trade between 1.2314 and 1.2774 with a 68% statistical probability calculated from the currency pair’s 1-month implied volatility reading of 6.4%. Although, spot GBPUSD could run into support around the 76.4% Fibonacci retracement level near the 1.24 handle which has previously served as an area of confluence. Looking to the upside, the prevailing bearish downtrend line and 61.8% Fib – which closely aligns with the upper bound of the 1-standard deviation implied trading range – might keep GBPUSD advances at bay. 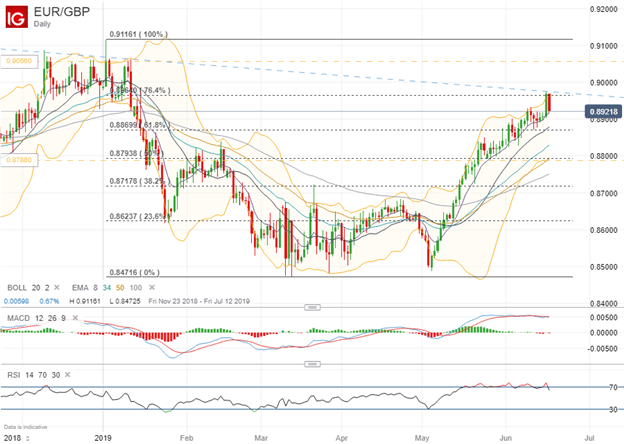 Spot EURGBP has flirted with year-to-date highs after a sharp climb from 0.8500 towards the 0.9000 handle. However, the forex rate appears to have embarked on a pullback after hitting heavy resistance at the 76.4% Fibonacci retracement of its 2019 trading range. If EURGBP fails to regain its footing above this level of technical resistance, spot prices could continue to recede towards support near the 61.8% Fib and 50.0% retracement line. On the other hand, topping the 0.9000 handle will likely open up the chance for spot EURGBP to jump towards 0.9056 – the upper bound of the option implied trading range calculated from a 1-month implied volatility reading of 5.2%.