New to trading? The free DailyFX Guide was written for you. Find it here.

Geopolitics were back to the trading fore in Asia on Friday, stopping most regional bourses from capitalizing on continued Wall Street gains which came in turn on the back of this week’s dovish monetary policy performance from the US Federal Reserve.

Despite the clear and usually risk-appetite-boosting indication that US interest rates will probably head lower in July, tension in the Middle East looms over the markets. President Donald Trump said Iran made a serious mistake in shooting down a US drone this week, insisting that the craft was in international airspace.

Worries about a US response sent gold up to six-year highs and kept the Yen supported even as other, more pro-cyclical asserts had made gains this week in the wake after the Fed. Oil prices appeared to calm before next week’s Group of 20 meeting in Osaka at which some sign of a thaw is hoped for between China and the US.

Energy companies did well as oil prices held up across the region. PetroChina added more than 1% and Japan’s Inpex surged more than 3.5%.

The US Dollar looks set for broad weekly losses as the Fed has now joined the growing chorus of central banks with a clear bias to cut rates.

The Australian Dollar is clearly in the same camp but has capitalized on the Greenback’s broad weakness to put in four straight days of gains. 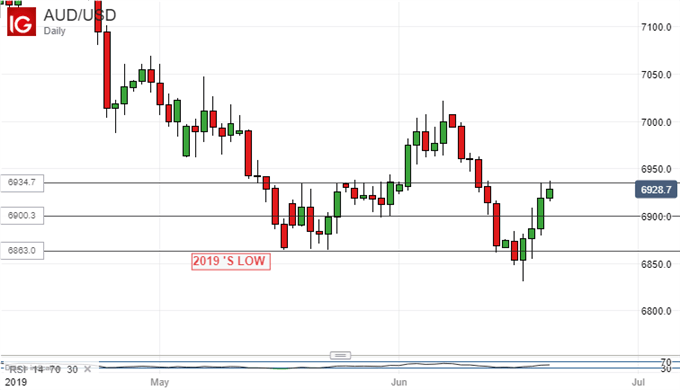 The pair is now back in the range which held between May 24 and June 2, and which guards the way back to the most recent significant daily chart highs.

Howeve,r the Australian Dollar’s own lack of interest rate support remains a clear danger to all bullish attempts, even if a risk appetite revival can hold the Aussie up for a while.