The Japanese Yen has been in a strong fundamental position against the US Dollar since late April and shared fully in the renewed bout of Dollar weakness seen this week in the wake of the Federal Reserve’s leaving wide open the door to lower rates next month.

The Bank of Japan for its part left the monetary settings alone this month. They’re so loose that that could not rationally be described as any sort of ‘hawkish’ play but, at the margin, the Fed has shifted its position while the BoJ’s remains the same.

Technically speaking USD/JPY remain firmly in the long downtrend channel which has marked that pair’s long swallow dive from the April highs. 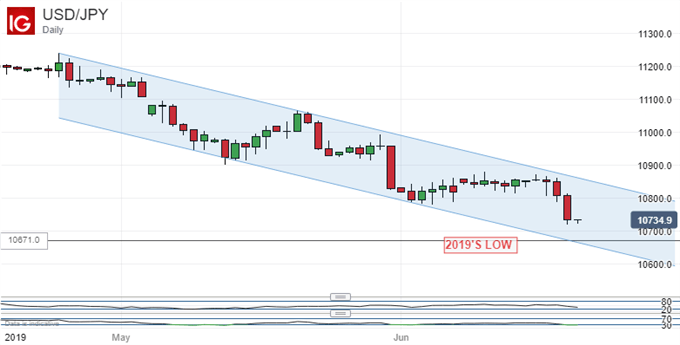 The pair remains above this year’s lows, however and a retest of those looks likely enough, possibly quite soon.

However, there does seem to be a rather obvious mismatch in the Yen’s behavior. The prospect of lower interest rates in the US and, by implication, elsewhere, has turbo-charged growth sensitive assets at the expense of perceived havens. The Japanese Yen usually falls into the latter category.

It may be the USD/JPY is simply experiencing a lagged effect, with Dollar weakness elsewhere feeding through into trade in the pair. It may also be that other factors, such as rising geopolitical tension in the Strait of Hormuz, are supporting the Japanese currency.

All the same, it might not be wise to bet on those lasting if broad risk appetite holds up.

A look at the monthly chart for USD/JPY reveals a long term-pennant formation going back to early 2016. This confluence of up- and down-trend lines is usually seen as a continuation pattern. That means that, once it resolves, the previous situation will reassert itself. In this case, that would be a forceful USD/JPY uptrend

This is by no means an infallible predictor, but in a low-rate scramble for yield it is unlikely that the Yen will do well. Falls from here could be good long-term buying opportunities. 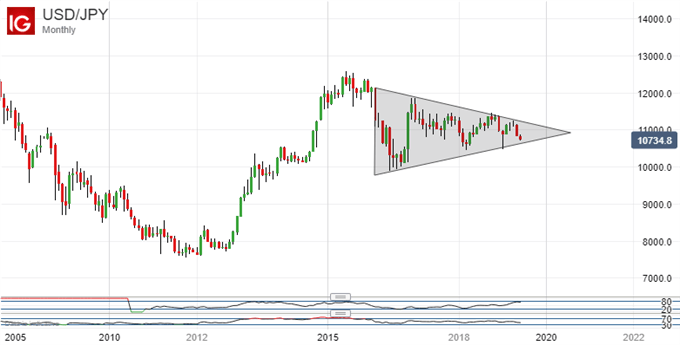 The Australian Dollar also fell victim to a dovish domestic central bank this week and sure enough AUD/JPY is back to its lows for 2019 (if you discount the ‘flash crash’ seen in the year’s opening days).

It is very difficult to get fundamentally bullish on the Australian Dollar, so complete is its lack of monetary policy support. It is notable from the daily chart above , however, that AUD/JPY has seen a huge number of days with very small ranged between open and close. This may suggest that there is not massive conviction in the market and that a risk-related upswing for the Aussie cannot be discounted even if it doesn’t last.

That view is probably entirely correct.