The Australian Dollar dipped then rose Wednesday after Reserve Bank of Australia Governor Philip Lowe said that to expect a further interest rate cut was ‘not unrealistic.’

Speaking in Adelaide Lowe offered a measured speech in which he acknowledged that lower rates could help boost pricing power via the channel of weaker currency but also that monetary options were not the only ones available.

It seems that Lowe joins a growing list of central bankers who feel that they have done almost as much as they safely can with monetary stimulus and who would like governments to be more active on the fiscal side. Lowe pointed out that there is only so much that another quarter-percentage point cut can hope to achieve. 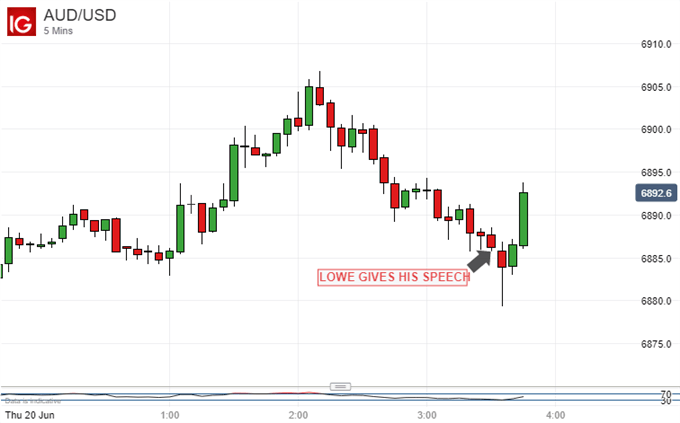 The Australian Dollar was boosted earlier against the Greenback as were most other traded currencies by the US Federal Reserve. It left the monetary settings alone for June but also kept the markets’ current forecast of a rate cut in July very much in play.

However, at a 1.25% record low, the Australian base rate remains well below the US Fed Funds Target rate, and further cuts are well priced into the Aussie futures curve. While the bar to more than a single further cut may well be higher than the market thinks, the local currency clearly lacks any prospect of domestic monetary support for the foreseeable future.

AUD/USD is stuck within a powerful and pervasive technical down-channel which has been in place since the start of 2018. 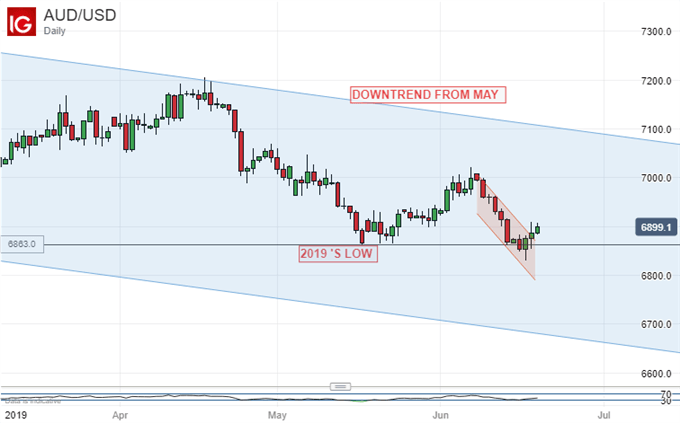 A withdrawal of monetary support from the US Dollar may serve to slow AUD/USD’s descent. But if the central banks on both sides of the pair are easing mode, and risk appetite which can support the pro-cyclical Australian Dollar remains fickle, it is hard to see enduring letup in the currency’s slide.

A comprehensive US-China trade deal might help Aussie bulls. Australia has perhaps as much at stake in that as any third country. But that doesn’t seem likely and it is becoming clearer that any likely accord will probably be far short of an economic silver bullet for the world.