The S&P 500 probed a key technical level in Wednesday’s trading as bulls look to notch a close above the 2815 to 2817 range. A close comfortably above 2815 could open the door for a continuation higher. Elsewhere, the Dow Jones remains a laggard this week with Boeing to blame. 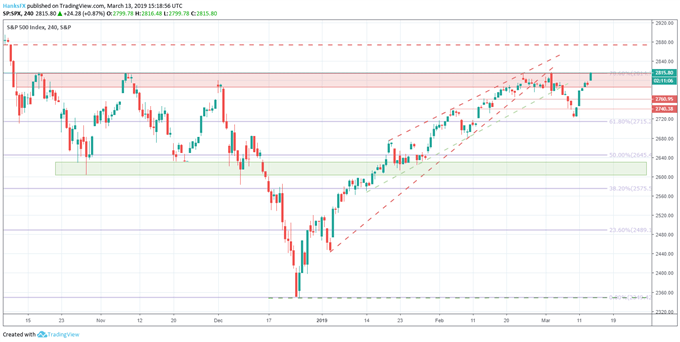 The world’s largest airplane-maker has now had two-thirds of its 737 Max models grounded - as of this morning. As of the afternoon, US President Donald Trump followed the lead of many other countries and announced officially that he was grounding the united States' fleet of that model plane, sending Boeing's shares even lower. Of the major developed economies, only Japan continues to operate the plane. Boeing's underperformance continues to contribute heavily to the price divergence between the S&P 500 and the Dow Jones. 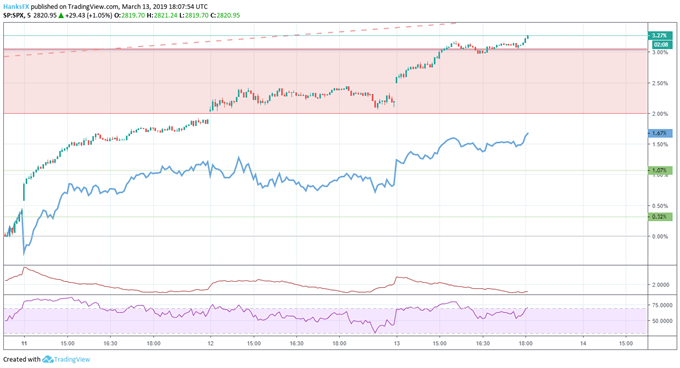 However, other stocks have also mounted considerable changes this week thereby contributing to the divergence. On Monday, Apple and Nvidia were accountable for a large portion of the S&P 500’s stellar performance. As the week progressed, S&P 500 components have continued their broader outperformance with the percentage of stocks in the S&P 500 above their 5-day moving average climbing versus the percentage of Dow components above their 5-day moving average. 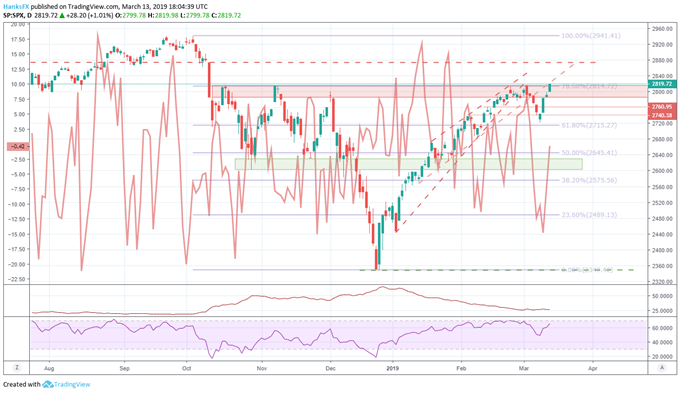 While single-stock components appear largely to blame this week, the make-up of the indices is also to blame. The S&P 500’s exposure to higher-growth components allows it to frequently outpace the blue-chip-based Dow Jones on positive days. Conversely, the blue-chip index often outperforms the S&P 500 on more “risk-off” trading sessions.

With Boeing boasting the best year-to-date performance in the Dow Jones, despite this week’s precipitous decline, the Industrial Average has had to come to terms with divergence, likely at a faster pace than usual. That said, a break above 2815 in the S&P 500 could see the indices drift further apart as the sentiment-leveraged growth appetite conflicts with targeted concerns for companies like Boeing to drag on the Dow.