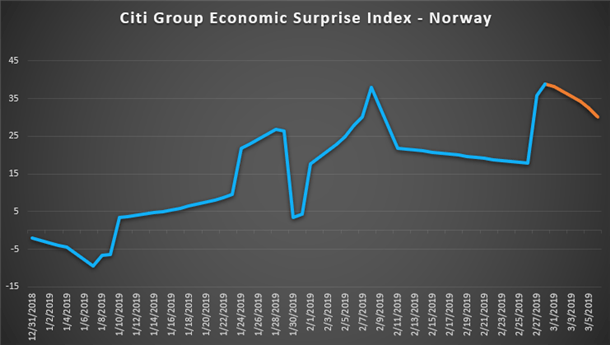 USD/NOK will be on its toes leading up to the release of Norway’s highly anticipated month-on-month industrial production data. The last report showed a 1.0 percent decline with economic performance out of Norway recently slumping as global growth slows down. The OECD recently cut its 2019 world growth outlook to 3.3 percent from 3.5.

As an-export driven economy with a heavy reliance on the petroleum sector, the Norwegian Krone is sensitive to changes in global demand and shifts in crude oil prices. Norway is also a major exporter of natural gas to the EU and is therefore also sensitive to economic changes in the Continent whether it be from reduced demand or political upheaval.

USD/NOK recently extended past the 8.5356-8.6323 resistance range but retreated shortly after the pair exhausted its sugar rush and came down after negative RSI divergence revealed slowing upside momentum. The next possible barrier rests at 8.6910 where the pair pivoted following the sharp incline. The fundamental outlook suggests USD/NOK still has significant room to climb. 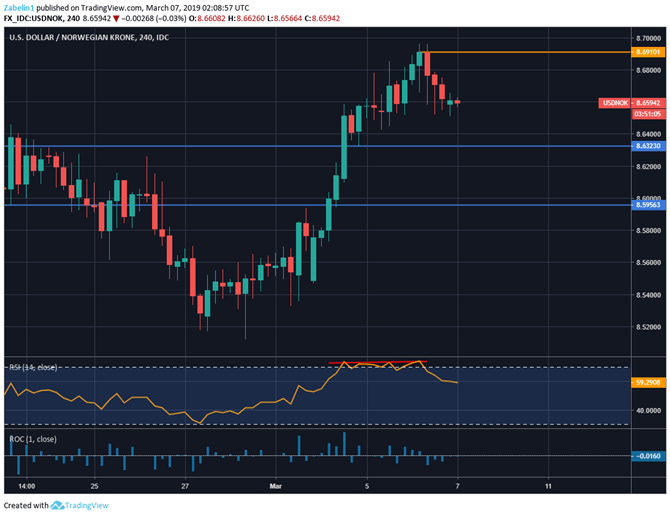 Looking ahead, the upcoming rate decision and commentary by the ECB may move the Nordic currency due to the EU’s unique relationship with Scandinavian economies. In Norway, CPI data is scheduled to be released next week which may influence the Norges Bank’s upcoming policy meeting on March 21. Their intention is to raise rates once this year, but gloomy presentiments may cause them to pivot and delay the hike.