The Australian Dollar slipped sharply Thursday on the news that China’s manufacturing sector contracted for a third straight month in February.

The country’s official Purchasing Managers Index came in at 49.2, below both the 49.5 which had been both January’s print and the expected February result. This series has now been below the 50 mark which separates expansion from contraction since December.

The non-manufacturing PMI was in the green, however. It came in at 54.3, for a composite of 52.4, but the weakness in manufacturing weighed heavily nonetheless.

The Australian Dollar can act as the markets’ favorite liquid China proxy given Australia’s close export links to the world’s second largest economy. It seems to have done so Thursday, with the China data more than erasing gains made earlier when Australia’s fourth-quarter private capital expenditure data smashed forecasts by rising 2% when a 0.5% gain had been tipped.

China’s numbers may need a grain of salt. The Lunar New Year break may well have weakened activity. However, they come after a raft of similarly weak numbers from around the world, and notably out of Europe, and are likely to be seen as further evidence that the global economy is slowing. 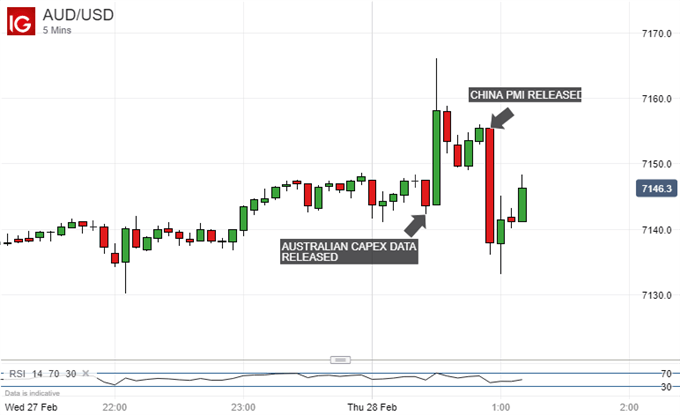 This is likely to be especially bad news for the Australian currency which is typically quite sensitive to world growth prospects.

That said the Aussie remains in a broad range against its US big brother. The currency was hit earlier this month by the Reserve Bank of Australia’s admission that record-low domestic interest rates could yet fall further. Futures markets had been pricing in just such a possibility since late 2018, but the RBA had previously stuck to its view that the next move was likely to be a rise, albeit not any time soon.

The central bank also slashed the growth and inflation forecasts on which its policy rests. For all that AUD/USD remains above the downtrend which dominated last year’s trade. Growing optimism for a trade settlement between China and the US has helped; Australia probably has as much skin in that game as any third country. A deal is probably the biggest single near-term risk currently run by Australian Dollar bears. 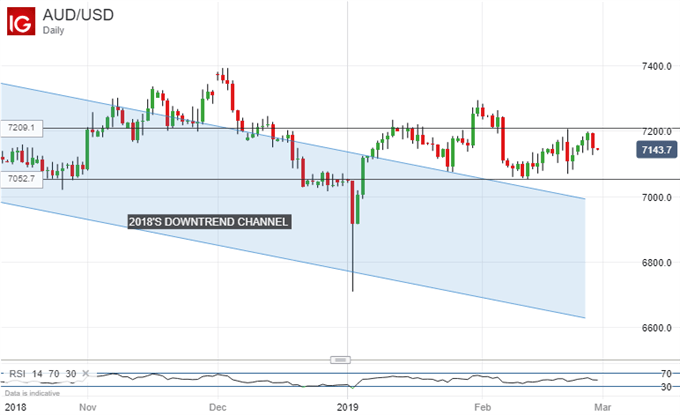 Increased caution around the path of US intertest rates has weakened the USD side of the pair, while strong Australian employment numbers also helped Aussie bulls’ cause.