Amazon traded 3% higher in the after-hours session Thursday following stellar fourth quarter earnings results but subsequently retraced as the report was investigated further. Revenue topped expectations, at $72.4 billion versus $71.61 billion. Similarly, earnings per share impressed with $6.04 compared to analyst forecasts of $5.59. The fourth quarter is typically the largest for Amazon due to the inclusion of the holiday shopping season, yet Q4 revenue marked the lowest growth since Q1 2015. Still, the 19.7% increase was formidable.

In a statement, Amazon CEO Jeff Bezos commented on the holiday period. “Alexa was very busy during her holiday season. Echo Dot was the best-selling item across all products on Amazon globally, and customers purchased millions more devices from the Echo family compared to last year.” Also contributing to the strong quarter, revenue from Amazon Web Services (AWS) increased significantly in the period.

According to Refinitiv, AWS Q4 revenue was $7.43 billion compared to the $7.3 consensus estimate from analysts. Increased revenue from AWS and other non-retail business have made significant inroads into increasing the firm’s margins which have been razor thin historically. That said, Amazon’s profitability also increased during the period. Operating income for the quarter is expected to be between $2.3 billion and $3.3 billion, up from $1.9 billion in the same period a year prior. While profitability has increased, Q1 forecasts left analysts unimpressed.

First quarter revenue is expected to be between $56 and $60 billion, slightly lower than analyst forecasts of $60.8 billion. The disappointing figures were likely to blame for the poor performance in Amazon’s share price after-hours. Growth is of paramount importance for a retailer that profits largely on incredibly thin margins and volume. Thus, lower growth expectations often constitute a reappraisal of a firm’s value.

Still, Q4 earnings were robust given the volatility in the stock market leading up to and during the holiday season. The performance is good enough for the retailer to maintain the title of the world’s most valuable corporation by market cap. The company now boasts a higher valuation than Apple and Microsoft, both of which reported earnings earlier this week. The remaining competitor and last FANG member to report earnings this season, Google, will report on Monday. 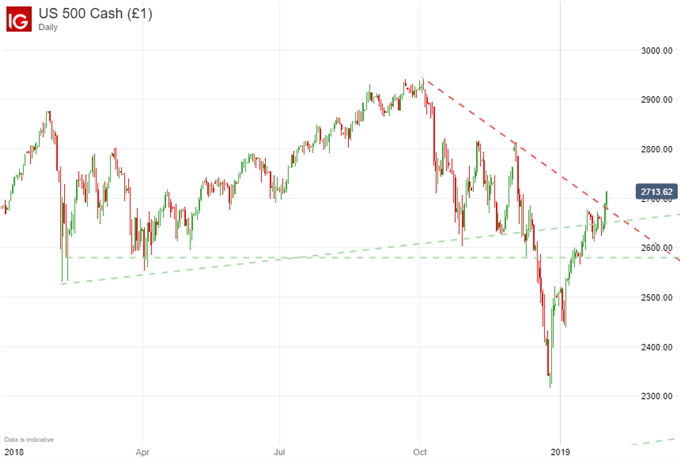 The overall US equity market enjoyed a widespread rally today after progress was heralded in US-China trade talks. Specifically, the S&P 500 rallied into the close after China’s Liu He announced the country would buy five million tons of US soybeans per month. Talks between the two nations are set to continue next week.