The Canadian Dollar is jumping after the Bank of Canada (BOC) announced its decision to hold interest rates steady at 1.75 percent. The decision comes widely as expected despite previous hawkish remarks from BOC Governor Stephen Poloz with tumbling oil prices and deteriorating economic data leading the central bank to reevaluate its monetary policy path.

Consequently, traders have become increasingly pessimistic over the likelihood of further tightening by the BOC as credit markets are pricing a negligible 7 basis points of higher interest rates in 2019. CAD price action is creeping its way back to the upside as those who have turned overly bearish on the currency reposition to reflect that the BOC “continues to judge that the policy interest rate will need to rise over time into a neutral range.” 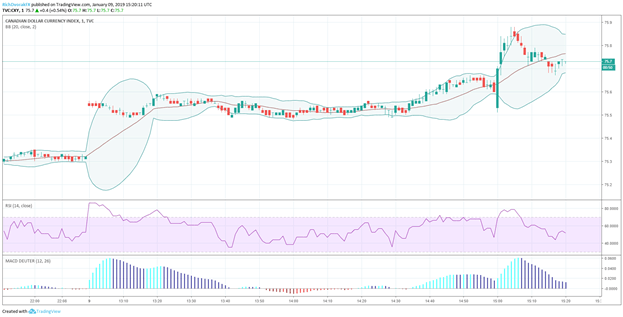 The Canadian Dollar is gaining ground after the release seeing that the currency has taken a beating since the BOC’s last policy decision due to markets anticipating a more dovish outlook. Recently as November, the futures implied probability of a BOC interest rate hike rested near 80 percent only to plummet alongside cratering Crude Oil prices as global growth weakness led to oversupply concerns.

This global uncertainty and deteriorating fundamentals left markets pricing a 15 percent chance of a rate cut a day prior to the central bank’s verdict. Thus, the reassessment of a less dovish BOC interest rate outlook is causing the CAD to move higher. 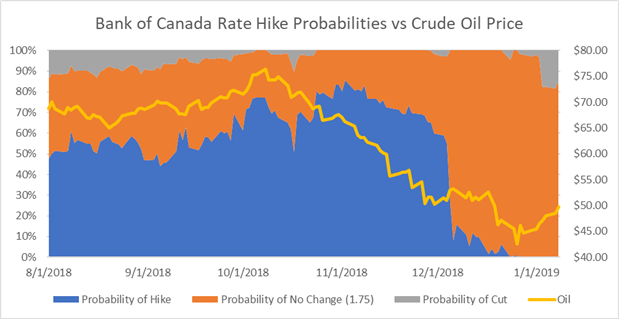 Taking the spotlight of the announcement is the BOC’s updated Monetary Policy Report (MPR) with revised projections for GDP, employment and inflation among other key economic indicators. When the last MPR was released in July 2018, the BOC projected the Canadian economy to grow at 2.1 percent last year and this year with GDP expected to slow to 1.9 percent in 2020. This compares to the new lower estimates of 2.0 percent, 1.7 percent and 2.1 percent for 2018, 2019 and 2020 respectively.

Take a look at IG’s real-time Client Sentiment tracker to see the bullish and bearish biases of traders.

The downward revisions are primarily attributed to oil market woes in addition to anticipated slowdowns in consumption, housing and business fixed investment. Real GDP was revised 0.4 percent lower for this year as adverse developments in the energy sector are set to overpower positive momentum on the back of revised federal tax laws and a relatively lower Canadian Dollar. Inflation was also revised 0.3 percent lower for 2019 to 1.7 percent before prices changes creep back up to the central bank’s 2.0 percent target. After this temporarily slowdown in economic activity at the beginning of 2019, Canada is expected to operate above potential growth on average according to the report.