Most Asia Pacific benchmark stock indexes traded higher as anticipated with markets awaiting further updates on the US China trade war front. During the Wall Street trading session, reports from US Commerce Secretary Wilbur Ross hinted at positive developments to come. This helped the S&P 500 close at its highest since December 18th.

Japan’s Nikkei 225 index rallied about 1.50 percent heading into Tuesday’s close, rising to its highest in just over two weeks. Things were also looking cheery in Australia with the ASX 200 climbing about 0.72%. Confirming the close would mean its highest since the beginning of December 2018. Meanwhile Chinese shares fared a little worse with the Shanghai Composite down about 0.20%.

The upbeat mood in stock markets resulted in cautious weakness in Japanese Yen prices. Curiously the typical pro-risk currencies such as the Australian and New Zealand Dollars weakened a little bit. The former was underwhelmed by a miss in domestic trade data. The US Dollar and Canadian Dollars edged higher ahead of important monetary policy fundamental news, perhaps weighing against AUD & NZD. The greenback awaits the FOMC minutes while CAD eyes a BoC rate decision later this week.

For the remainder of the session, prominent economic news flow is notably absent. In the interim, all eyes will be on updates from US China trade talks. S&P 500 futures are pointing notably higher, perhaps reflecting the markets betting on positive outcomes in those negotiations. As such, an unexpectedly disappointing outcome may fuel more adverse volatility in stocks then confirming a rosy one that the markets seem to be already anticipating.

Recent gains in the Nikkei 225 still leave it just under the near-term descending resistance line from early December 2018. In addition, prices are also sitting on the March 26th low around 20,347. Combining these make for a prominent resistance area. A close above it may be a prelude for bigger gains to come.

If you are interested in currency pairs that I am actively trading and or closely following, I am currently short NZD/USD and am pending short EUR/CAD. You may follow me on twitter @ddubrovskyFX for more immediate updates on my trading ventures. 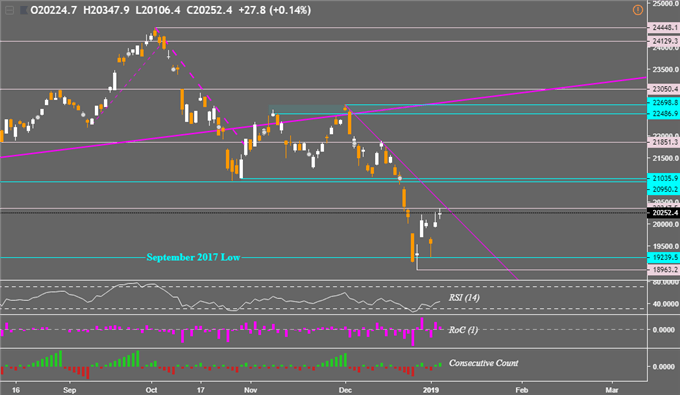