The Australian Dollar wilted Wednesday on yet more gloomy news from China’s economy, in the form of another weak print from the manufacturing sector.

The Caixin Purchasing Managers Index came in at 49.7 for December. In the logic of PMI releases any reading below 50 signifies contraction, and this was the first slip for the series since May 2017. The print was well below expectations, which centered on 50.2. New manufacturing orders also contracted, coming in at 49.8- the first reduction since June 2016.

The Caixin survery focuses on smaller concerns, often those with significant private involvement. The official manufacturing PMI has already been released. It showed the first contraction in large, state-linked firms’ output since mid-2016. The data suggest that the deceleration which began to be seen around mid-year in China has deepened. They also underline the urgency with which Beijing needs a durable trade settlement with the United States.

The Australian Dollar can act as the foreign exchange market’s favorite liquid China proxy thanks to its free float and Australia’s formidable raw-material export links with China. It certainly did so on Wednesday, with AUD/USD appreciably lower after the data. 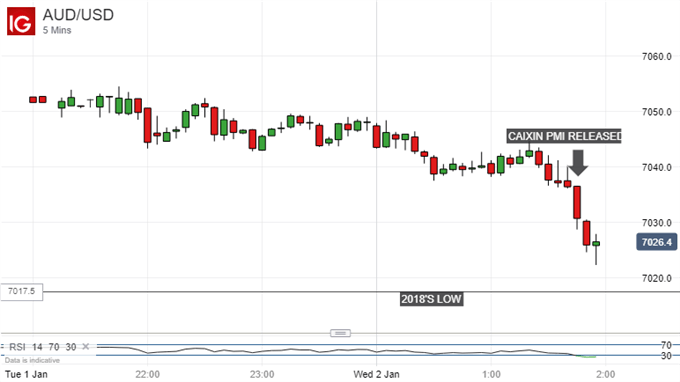 Indeed the pair is now closing in again on its lows for 2018. On its daily chart, AUD/USD is back within the downtrend which held sway for much of the old year. The Aussie did get a small reprieve, as did many other currencies, as the market moved to reprice some of its more enthusiastic interest rate forecasts for the US in 2019.

However, Australian rates remain at their record low of 1.50%. The Reserve Bank of Australia may still insist that the next move, when it comes, is likely to be a rise. However, the local rate futures markets has begged to differ for some weeks now. It is moving to price in still-lower rates over the next eighteen months, even if they do not at present fully discount a quarter-point reduction.

AUD/USD is currently holding close to its lows for 2018, with ranges predictably narrowing as holiday-season trade has taken over. However, the Australian currency market is likely to focus more on this rate pricing as 2019 gets fully under way.