Join our analysts for live and interactive coverage of all the major Australian economic data at the DailyFX Webinars. We’d love to have your company.

The Australian Dollar has lacked interest rate support for much of 2018, and the situation could worsen into the new year.

In public the Reserve Bank of Australia still insists that the most likely next move will be an increase in the record low, 1.50% Official Cash Rate. That has been unchanged since August 2016 and is already the longest unchanged base rate in modern Australian history.

Obviously this has put AUD/USD under some pressure as the US Federal Reserve has steadily increased its own rates, taking US yields up to and then beyond Australia’s.

However, the RBA’s problem is that the markets have never quite believed that rates would rise very far very soon. Now that problem seems to have become more acute. Australian rate futures markets used to price in an unchanged rate right across their eighteen-month forecast horizon.

AUD/USD enjoyed a brief bout of relative strength between mid-November and this week, as markets moved to price out the more extreme forecasts of tighter US monetary policy. Now however that strength is waning as investors start to doubt that the RBA will be able to raise rates and may even have to cut them.

This poses two problems for Aussie bulls. One is that of course the currency will continue to lack monetary support even if the Fed provides less of the same for the greenback. The other is the issue of central bank credibility. If the RBA sticks with its belief that rates are more likely to rise than fall while the markets clearly think otherwise, someone is clearly going to have to change their mind.

Given a combination of falling house prices, tightening credit conditions and limited growth, inflation looks likely to be mired for some time. Throw in all the other global economic worries, from trade war to Brexit, and the RBA’s optimism seems a little misplaced.

Of course, a surge back in global risk appetite could see the Aussie rise again, perhaps putting mid-December’s AUD/USD peak of 0.7395 back in prospect. However, absent that the currency looks vulnerable as we head into a new year, with the psychologically key 0.700 area likely to come under threat.

Whether or not that can hold if challenged may tell investors much about the underlying sentiment toward the Australian currency.

One crumb of comfort might lie in the possibility that a still-lower Australian Dollar might see inflation pick up a bit. Sustained rises might offer the prospect of higher rates ahead, but this prospect would take time to crystalize,

Lower rates need not be bad news for the Australian stock market- a the very least they should support consumer spending. However, the ASX 200 tends to move very much with general risk appetite in any case which is why it currently languishes at new 2018 lows. The country’s financial sector is heavily weighted within the index, and that would certainly not welcome any move lower for the OCR.

In any case the ASX’s monthly chart shows a precipitous fall form this year’s peaks, arrested so far by support at the lows of July-November, 2016. It’s notable also that upward channel support from February of that year has been conclusively trashed. 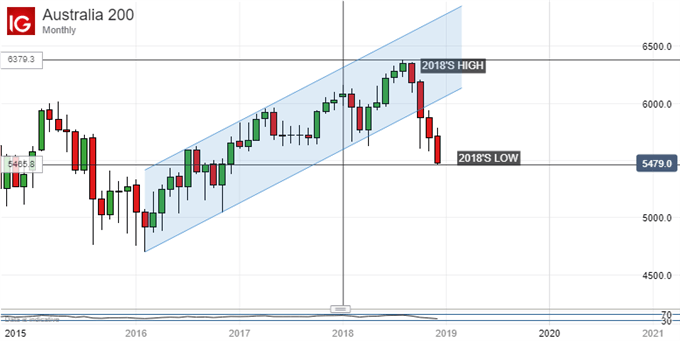 The end of 2018 is an uncertain time for all growtt- linked assets wherever they are, but it seems that Australia’s have more to worry about that most.