The Oil Market is Not Yet Convinced by OPEC’s Plan

Ahead of the bi-annual OPEC meeting on December 6th, expectations have been growing that the cartel will look to cut oil output (by roughly 1-1.4mbpd) in order to prevent oversupply given the slowing demand growth, coupled with the surge in oil production by the US (currently producing at a record 11.7mbpd). However, the bounce in oil prices had been short-lived as Russia stated that they would want to take a wait-and-see approach with regard to a potential supply cut. Since this statement by Russia, oil prices are off 1% as the lack of cooperation from Russia dents sentiment in the energy complex, suggesting that the market is not buying the current plan by OPEC. For OPEC’s plan to lift oil prices, Russian involvement is needed to increase its impact.

The Brent curve is comfortably sitting in contango with January-February spreads at -$0.29/bbl. This in turn keeps the outlook bearish for the oil complex given the negative roll yield of a contango market. Consequently, fund managers have cut record high bets on a sustained rally in Brent by 50% in 2-months to the lowest level since mid-2017, implying that the bull market has been unwound. Downside risks in the form of slowing demand and rising US shale production has outweighed the upside impact of Iranian sanctions and potential production cuts from OPEC. As such, the downward trend remains. 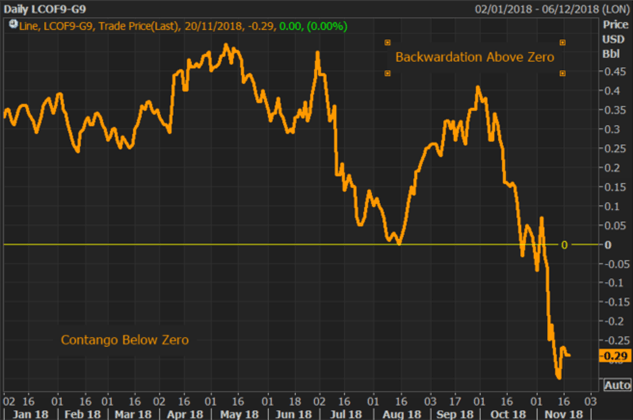 A short-term bounce in Brent crude could be on the horizon with prices sitting in oversold territory, while the negative momentum has also eased slightly. Alongside this, based on IG client sentiment oil prices may see a modest reversal higher, despite the fact that clients remain net long.

However, key resistance in the form of the descending trendline could cap price action, which in turn will keep the downtrend intact, suggesting longer term pain for oil. On the downside, support is situated at $64.80 (Nov low) and $64.03 (38.2% Fib from 2016 low to 2018 high).