Oil is one of the most actively traded commodities in the world, and for good reason. It has the power to slide economies into recession and is constantly present in politics.

Two of the most commonly traded types of crude oil are WTI and Brent. It is worth understanding what the top differences between WTI and Brent Crude are, so as to make informed trading decisions.

WTI vs Brent: What are the differences?

There are five main differences between WTI and Brent:

WTI is extracted from oil fields in the United States. It is primarily extracted in Texas, Louisiana and North Dakota and is then transported via pipeline to Cushing, Oklahoma for delivery.

Technological developments in the early 2000s made it possible to extract oil from shale rock, a process that was thought to be impossible at the time. This was dubbed the Shale Revolution and led to vastly more amounts of oil being produced by the USA.

Brent crude is extracted from oil fields in the North Sea. ‘Brent Crude’ refers to a blend of four crude oils - Brent, Forties, Osberg, and Ekofisk which together are known as BFOE. 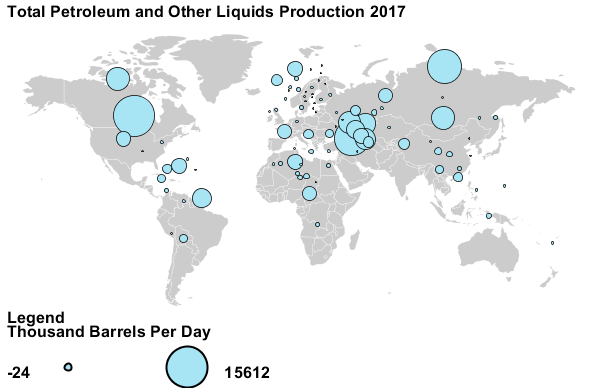 2. Geopolitical difference between WTI and Brent

Geopolitical influences - such as volatile political systems of oil producing countries, and OPEC’s rising and falling oil production levels - can have a big impact on oil price. Traders should know how these vary for WTI and Brent.

For a bit of background, many of the world’s leading oil producing nations outside of the US rely on crude oil to balance their fiscal budget. Historically their political systems have been quite volatile, which has led to price spikes in oil – particularly Brent crude - when oil production comes into doubt.

Many of these nations are members of the Organization of the Petroleum Exporting Countries (OPEC). Key members include Saudi Arabia, Iran, Iraq, Venezuela and Nigeria, and a significant part of their national income is derived from crude oil. OPEC claims to try and ensure price stability of oil through increasing or decreasing oil production by its member countries.

When it comes to trading oil, Brent oil traders should be on the watch for tensions rising in the Middle-East, which is one of the biggest global producers of crude oil. Geopolitical tension can cause the market to speculate on an immediate or developing lack of oil supply, leading to sharp movements in the price. The map below shows just how much oil is produced in the Middle-East.

WTI oil traders, similarily, will be monitoring the supply and demand factors in the U.S. Disruptions to either Brent crude or WTI crude could cause the WTI-Brent spread to change causing one of the markets to move more aggressively relative to the other. 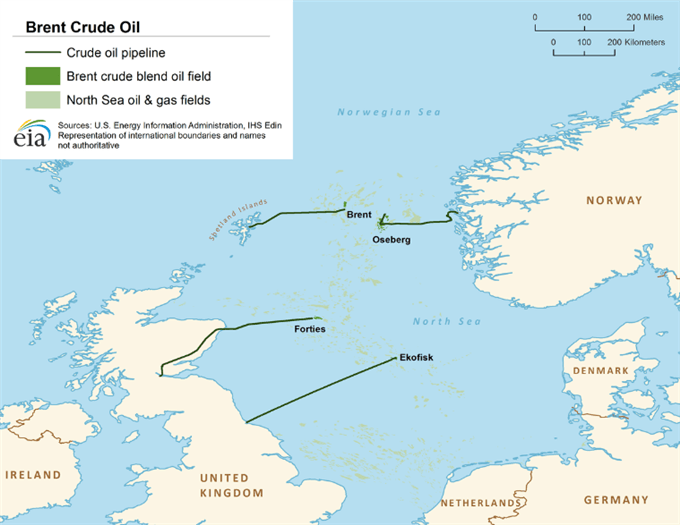 Brent and WTI have very different sulfur content and API gravity, which can directly affect the price of the oils.

4. Where the Oils are Traded

There are a variety of platforms where the oils are traded depending upon your country of residence. One of the main ways to trade crude oil is through a futures contract, however there are differences for WTI and Brent.

Brent futures contracts are traded on the Intercontinental Exchange (ICE) in London.

The specifications for WTI and Brent futures are as follows:

The trading hours for WTI and Brent also vary.

5. WTI and Brent prices and benchmark

In the past, WTI traded at a premium to Brent. However due to the Shale Revolution in the early 2000s (in which WTI production increased) and more imports to the US from Canada, the price of WTI declined. It now usually trades at a discount to Brent.

Today WTI is the benchmark for oil prices in the US, while the rest of the world - and nearly two-thirds of all oil contracts traded - are on Brent. This makes Brent the global Benchmark.

The price difference between WTI and Brent is known as the WTI vs Brent Spread. The spread will change from time to time, as the supply and demand forces of each crude oil are elastic due to geopolitics, weather, and regulation.

The chart below shows the price difference between WTI and Brent 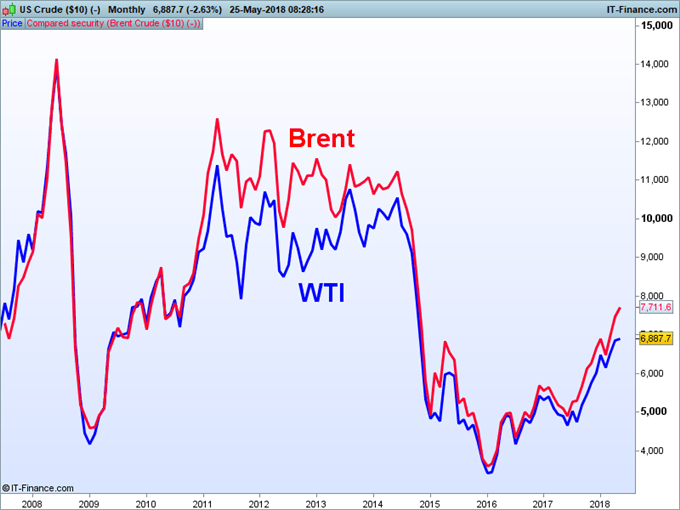 Though we have listed the top five differences between WTI and Brent, these oils typically trade within a similar spread distance from one another. There are times, however, when supply or demand constraints will significantly move one of the crude oils more than the other – such as tensions in the Middle-East or a natural disaster in North America, both of which could shut down extraction or refining ability of Brent and WTI, respectively.

The key take away for traders is to keep an eye on crude oil news and monitor the spread between the two crude oils. A change in the spread may indicate a change to the supply or demand of one of the oils, which is important knowledge to be able to trade those changes accordingly.

At DailyFX we have many resources to help you improve your trading: