The cryptocurrency market sell-off continues as sellers take complete control of the market and push prices through noted support levels with ease. Volume has picked up in the sell-off confirming the negative picture although volume is still less than half the turnover seen in the December/January bull surge. According to client sentiment, retail remain heavily long of cryptocurrencies although this may begin to change if heavy losses continue.

A numer of factors are driving prices lower including the contentious Bitcoin Cash fork, the delay of Chinese Bitcoin miner Canaan’s IPO and last Friday’s SEC release classifying two ICOs as securities. We have warned over the past weeks that the cryptocurrency market has been displaying classic breakout potential with a once volatile asset trapped in ultra-tight trading ranges on very low volume. The fear is that investors who have been holding in the hope that prices will recover will throw in the towel, causing prices to fall further and faster as buyers stay on the sidelines.

The daily Bitcoin chart remains negative despite the extreme oversold condition shown by the RSI indicator. All recent support levels have been broken with ease with the next level of any technical support kicking in at $2,970, the September 15, 2017 swing low. 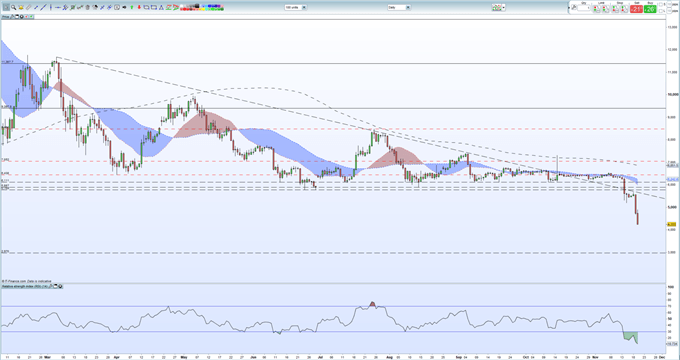 Ripple (XRP) has been lagging the market but now is coming under heavy selling pressure and is registering a double-digit loss. The SEC ruling last week – that two ICOs were securities – will affect Ripple as many think that XRP should already be classified as a security. If a coin becomes classified as a security it, and the exchange it is traded on, comes under increased regulatory scrutiny. The latest XRP chart shows horizontal support at $0.375 currently guarding a further fall down to the August 14 low at $0.247. 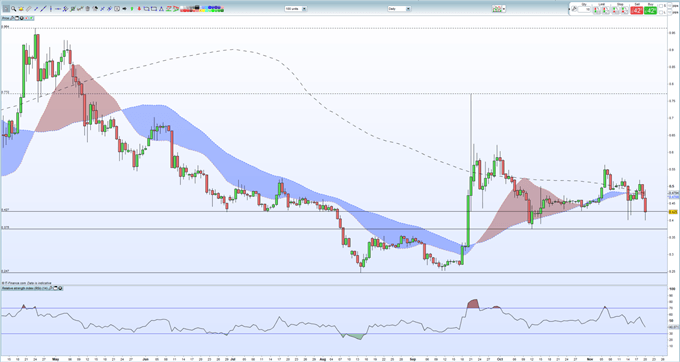