The Shanghai Composite rose about 0.70% as it headed for its highest close in one week. Meanwhile in Australia and South Korea, the ASX 200 and KOSPI traded little changed. Stocks showed little volatility to commentary from Fed Chair Jerome Powell which acknowledged that global growth is seeing a slowdown this year. He also added that the US economy is in a good pace that that it can grow faster.

Volatility could be found in the Australian Dollar which soared on a better-than-expected local jobs report. Australian front-end government bond yields rallied, signaling increased RBA rate hike bets. While this may drive the Aussie a little bit higher in the near-term, gains may not last down the road. The central bank remains very well patient before raising rates and is considerably less hawkish than the Fed.

Gains in AUD did weigh against the US Dollar though, but more progress needs to be done in AUD/USD to confirm a reversal of the dominant downtrend. S&P 500 futures are little changed heading into the European and US sessions, perhaps insinuating calm trading to come. But stocks and risk-sensitive FX remain vulnerable to stray negative Brexit progress and Italian budget headlines

The ASX 200’s attempt to test the descending trend line from September was stopped by a horizontal resistance at 5,942. This area is a combination of the mid-October and November highs. Prices have since fallen through support at 5,795, stopping at 5,724 which is the April low. A descent through that will open the door to test the October 26th low at 5,624 which if taken out, may see the dominant downtrend resume. 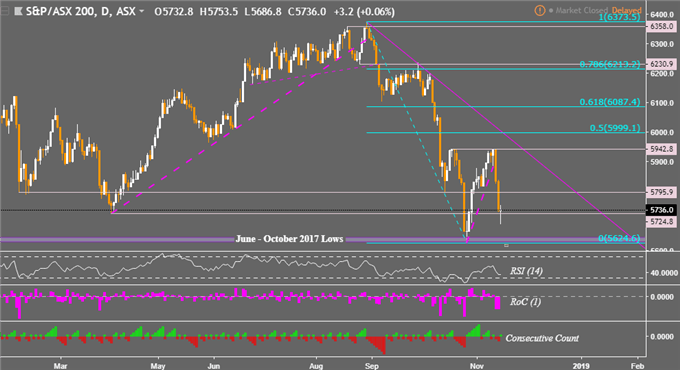