Oil prices have extended its record losing run, having dropped for a 12th consecutive session with yesterday seeing the biggest price decline (Over 7%) since 2014. While I mentioned in yesterday’s report, several reasons behind the price decline. The persistent has also been linked to the growing concerns and warnings from the IEA and OPEC over a supply glut, heading into 2019.

What has been made apparent by OPEC and the IEA is that oil demand growth is slowing, while oil supply, most notably from the US is rising to record levels at a rapid rate. This morning’s IEA report implied that a there will be a stock build of 0.7mbpd, which is expected to increase to 2mbpd in the first half of 2019. Consequently, this has dampened the outlook in the medium term for oil prices.

Following yesterday’s price declines, this morning has seen a fresh wave of OPEC source reports, which have suggested that the cartel is looking at potentially delivering a 1.4mbpd oil output cut for 2019, in order to avoid an oil supply surplus that would pressure prices (Decision likely to be taken at the December 6th OPEC meeting). This in turn has offered a bounce for oil prices with Brent crude jumping 1.4%, potentially establishing a near term bottom. However, as has been the case recently, the talk of potential supply cuts has been quickly criticized by President Trump.

Alongside this, much depends on not only OPEC’s actions but also Russia and the US, who are both producing at record levels, particularly as demand is seen dropping for OPEC oil. Consequently, this implies that a production cut may do little to restore prices if Russian and US production continues to pump at record levels, while demand also falters. 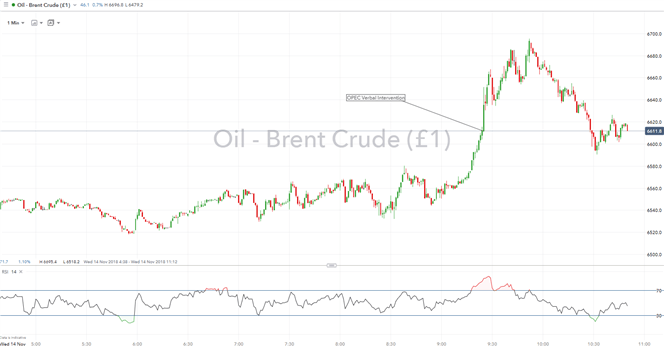