Yesterday saw oil prices drop for the 11th consecutive session, marking a record run of losses for crude oil, which looks set to continue with Brent slipping some 2% this morning. Consequently, Brent crude has fallen over $18/bbl (-21%) since the October peak, while WTI crude is eying its lowest close of the year.

Ahead of US sanctions on Iran, investor angst over potential supply shocks had risen, which in turn saw oil prices reach 4yr highs. Much to the displeasure of President Trump, the President had increased his calls for the likes of OPEC to boost production to stem further price rises. In response to this, Saudi Arabia had complied to this, with the OPEC kingpin, alongside Russia both agreeing to boost production ahead of the imposition of Iranian sanctions, while US oil production also surged to record levels.

However, at the beginning of November, the US had announced that they would provide waivers to 8 nations, allowing them to continue buying Iranian oil at a reduced rate. As such, this had reduced the potential impact that Iranian sanctions would have on oil market supply, prompting a sell- off in prices as investors priced out risks of higher oil prices.

Consequently, this has led to a U-TURN from OPEC, who at the most recent JMMC meeting and OPEC monthly report expect supply growth to outstrip demand growth, implying that the bearish sentiment is set to continue in their short-term outlook. This in turn, has seen Saudi Arabia now pledge to reduce exports by 500kbpd and call on OPEC to reduce production by 1mbpd.

Initial optimism from potential oil cuts from 2019, quickly receded after further jawboning from President Trump, stating that he “hopes, Saudi Arabia and OPEC will not be cutting production. Oil prices should be much lower based on supply”. While it is unlikely that OPEC will listen to Trump’s jawboning given that the cartel is warning of a supply glut, it is likely that Trump will continue to enforce the view that oil need to be lower. 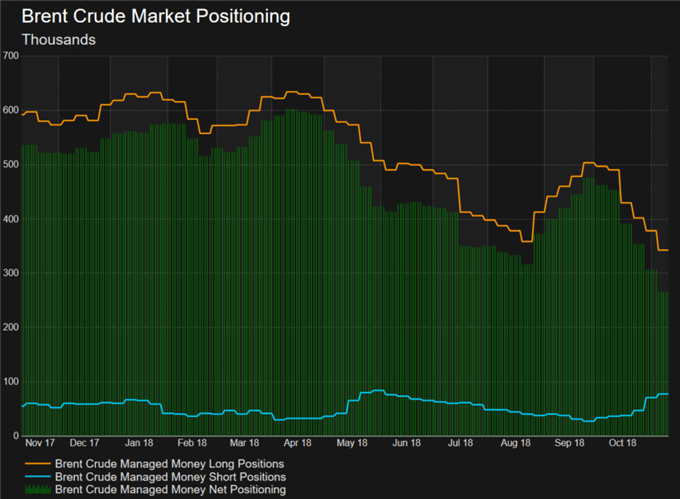 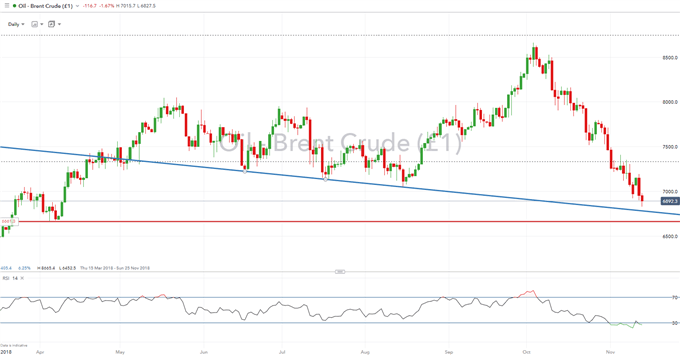 Brent crude oil prices remains on the backfoot to test lower levels. However, with the RSI moving back into oversold territory, this may provide a slight reprieve, which will allow for bears to reload shorts and test April lows situated at $66.60