- Bank of England warns of high volatility and low liquidity.

2018 is turning out to be a very bad year for cryptocurrency ‘hodlers’ with prices hitting multi-month lows and taking out previous support levels. A low volume market is also not helping prospective bulls who may well be sitting on the sidelines until there are signs that the current bear market is nearing an end. The Bank of England recently sent out warnings to market participants, saying that cryptocurrencies exhibit high price volatility and relative illiquidity. Sam Woods, the central bank’s deputy governor for financial stability added that businesses involved in the market could also be exposed to reputational risks and fraud.

And Barclays added to the negative overtone when Will Hobbs, head of investment strategy warned that the market rout is not over and that the value of many cryptocurrencies is still a long way below their current trading levels.

Bitcoin’s market capitalization is likely to drop back below $100 billion for the first time in around seven months after having hit a high in excess of $330 billion in December 2017. The November 12 swing low at $5,622 needs to hold otherwise BTC could test $5,000 or lower in the short-term. And if the sell-off gathers momentum, the complete retracement of the September – December rally is likely, all the way back to $2,970. Resistance at $6,438 ahead of $7,052. 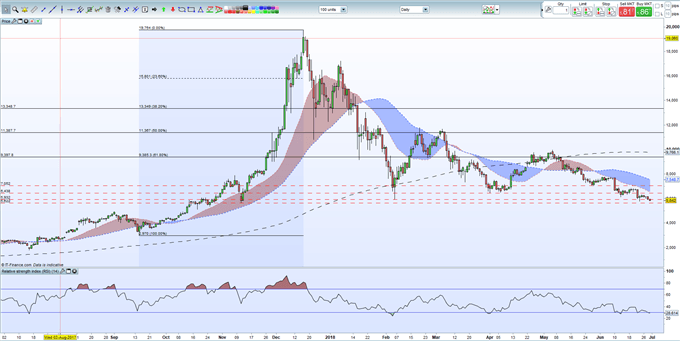 The third-largest cryptocurrency continues to drift lower and due to the wild upswing between December 2017 and January 2018 has left a chart with few remaining technical support levels. A break below the psychological level of $0.40 would set up a test around $0.29 before $0.20 comes into play. On the upside, $0.46 may provide weak resistance before sterner tests at $0.59 and $0.62. 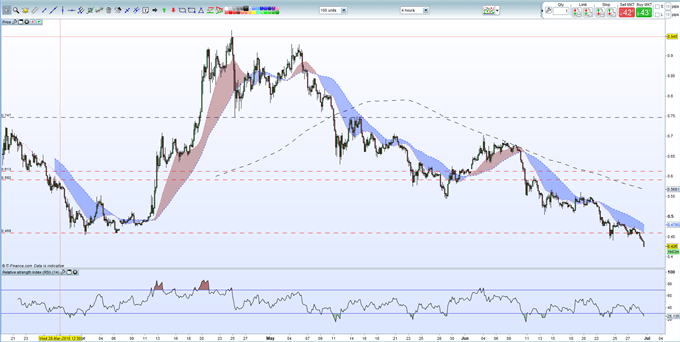 Ethereum (ETH) is rapidly approaching an important resistance zone between $360 and $397 which if broken convincingly would bring the October – November 2017 cluster of trades around $300 into play. If resistance holds and the downtrend line is broken, a re-test of $497 may occur although it should provide strong resistance. 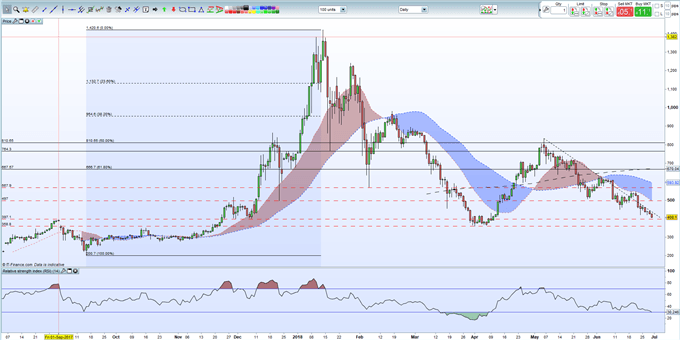 Litecoin (LTC) has already given back all of the surge that saw the token jump to hit a high of $370 and currently trades at the lowest price since the end of November. Again, the token could easily fall by another 20% where it could find reasonable support between $50-$60, but the downtrend still looks to be in control. The June 22 ‘spike’ at $106 should not provide any resistance, but the cluster between $110 and $115 will be difficult to overcome without any positive fundamental news. 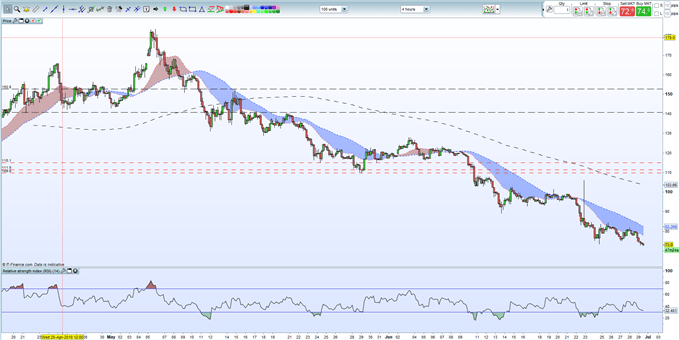 If you are interested in trading Bitcoin, Ripple, Ether or Litecoin we can offer you an informative Introduction to Bitcoin Trading Guide.

What’s your view of the cryptocurrency market – oversold?

You can leave your comments in the section below or you can contact the author by email at nicholas.cawley@ig.com or via Twitter @nickcawley1.