- A negative chart set-up could see Brent dip below $70/bbl.

The DailyFX Q2 Trading Forecasts for all major currencies, commodities and indices, are availableto download to help you make more informed trading decisions.

The latest OPEC meeting starts in Vienna today against a gloomy backdrop for the oil market. OPEC members, who are said to be looking to increase production, will have to factor in a mass of new headwinds that may limit their production hike. The US-China trade war shows no sign of abating with both sides ramping up trade tariffs in a tit-for-tat manner, dampening growth prospects and the demand for oil. In Europe the economic strength seen in Q1 has seemingly passed with recent data prompting analysts to revise down growth prospects for the rest of 2018. In addition, the recent strength of the US dollar has weighed on oil and this looks unlikely to change with another two 0.25% US interest rate hikes likely this year, making a total of four in 2018. The production increase is being led by Saudi Arabia and Russia with the former recently saying that a one million barrel a day increase may be workable.

The latest daily oil chart continues to throw out negative signals with a drop below $70/bbl. a distinct possibility over the next few weeks. Support kick-in either side of $71/bbl. from 50% Fibonacci retracement and the January 25 swing high before the 61.8% retracement level at $68.86/bbl. and the 200-day moving average at $68.55/bbl. become relevant. On the upside $73.30/bbl. may provide weak resistance ahead of a more formidable cluster of resistance around $76.00/bbl.

The latest IG Client Sentiment Indicator shows how retail are positioned on a wide variety of financial markets, including foreign exchange, commodities, indices and cryptocurrencies. 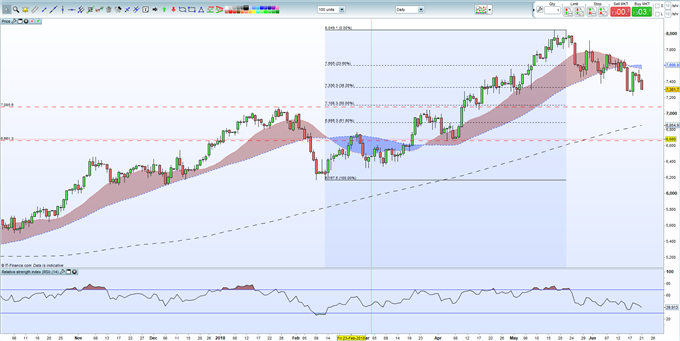 What’s your opinion on the Oil? Share your thoughts with us using the comments section at the end of the article or you can contact the author via email at Nicholas.cawley@ig.com or via Twitter @nickcawley1