For a more in-depth analysis on Oil Prices, check out the Q2 Forecast for Oil

A month on from when the OPEC kingpin, Saudi Arabia, signaled their ambition for $80 oil prices, the black gold has risen over 16% to finally hit their initial target. The dominant driver behind the surge has been the escalation of geopolitical tensions in the middle east, most notably, the US made the decision to withdraw from the Iran Nuclear Deal and re-impose sanctions. Alongside this, Venezuela’s oil production continues to plunge while the upcoming election could spark a reaction from the US.

Last week, President Trump announced that the US will exit the Iran Nuclear Deal and re-impose sanctions within a 90-day (Aug 4th) and 180-day (Nov 4th) wind down period. As such, oil prices are likely to remain elevated as sanctions on Iran’s oil exports could lead to an oil shortage shock with disruption to supply within the region of 500k bpd. Since sanctions on Iran’s oil exports had been lifted in January 2016, oil production rose 900k bpd to 3.82mln from 2.9mln. However, with production likely to take a hit this could prompt OPEC to intervene and keep the market well supplied. 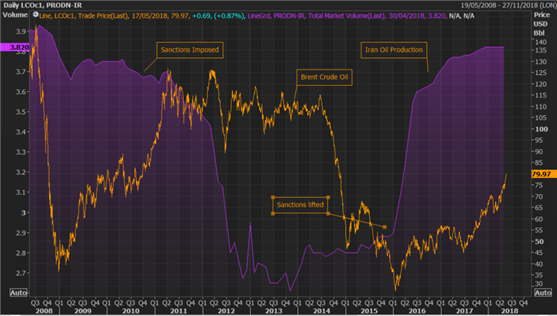 On Sunday, Venezuela will hold a somewhat controversial (rigged) election, risking a response from the US, which could see sanctions on Venezuela’s already weakening oil industry. Oil production in Venezuela over the past year have already plunged over 500k bpd to 1.41mln bpd, which is at risk of a further reduction as the US ponder over actions to take against Venezuela. Given that sanctions have been re-imposed on Iran, Trump may hold back from imposing sanctions on crude flows as this would likely push US gas prices even higher (currently at 3-year highs). However, the US could halt exports to Venezuela of a product called diluent, which allows Venezuela’s thick oil to be transported. Such a move could cost Venezuela as much as 500k bpd in exports leading to a “physical” shortage in oil as opposed to a “perceived” one from Iran sanctions, subsequently pushing oil prices higher. 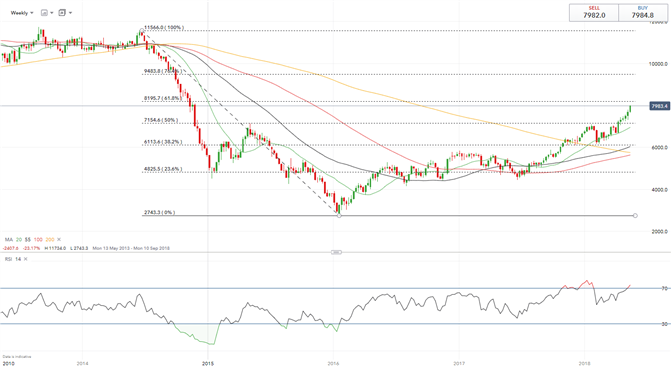 According to IG speculative positioning, US Crude prices may continue to rise. Traders are further net-short than yesterday and last week, and the combination of current sentiment and recent changes gives us a stronger Oil - US Crude-bullish contrarian trading bias. To see oil speculative positioning data, click here

In the face of rising oil prices, oil related currencies (NOK, CAD) are likely to outperform net oil importers (TRY, INR, JPY). CADJPY offers upside value with 50bps of BoC tightening priced in this year, while EURNOK downside continues to look attractive given that the Norges Bank are seen hiking after summer (Sep’18), while the ECB could delay a policy shift announcement.